Alt-Berg's HQ is not the sort of place you'd drive past and be enticed in to visit, bit the company's base in North Yorkshire is increasingly becoming a destination in its own right.

Since 1989 the company has been making boots in Richmond and while every boot to wear the brand's name goes through its Yorkshire HQ the company now runs factories in both Italy and Romania, where the mass produced lines originate. Despite a relatively low volume presence in the outdoor shops, however, we're not talking about small numbers; with the contract for the MoD we're talking production runs of some lines of 100,000 units!

Not only does every pair of boots find its way through the Richmond factory, but every single pair starts there too, starting as a mental image in the mind of founder Mike Sheehan who still designs boots the old way. Despite the advent of computers and CAD programmes every single design is created on a file full of paper; every calculation made by hand and every detail precisely plotted on individual sheets. It's not a case of being an extreme Luddite that drives this process, however, despite the "old school" look inside the factory with it's classic, heavy duty, machinery. With decades of experience in designing by hand Mike, a man who says if he was dropped on a desert island he'd be making sandals from cork trees within a day, finds that laying out designs on paper is both more efficient and faster than using computers. 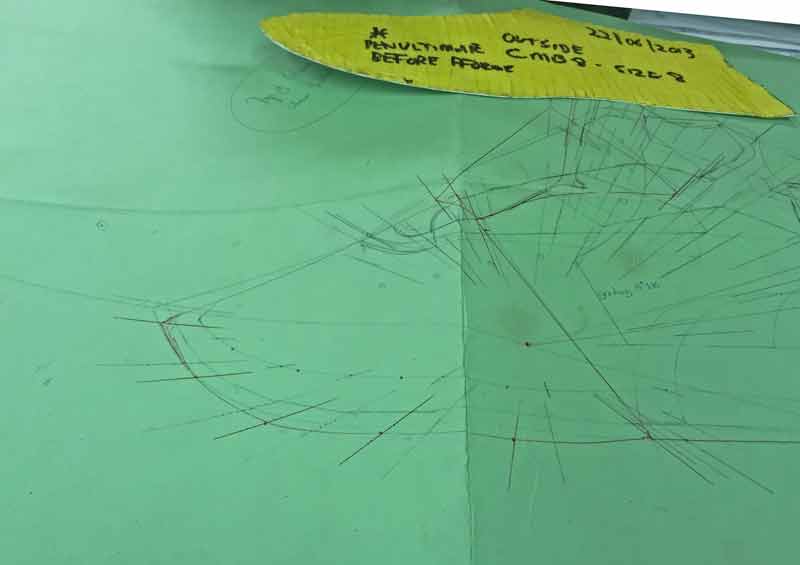 Every line represents the direction and measurements from the last's centre in precise detail.

For specialist boots the whole process from paper to finished product lines takes place within the Richmond site, while high volume lines are now manufactured overseas. The company's used the same factory in Italy to produce it's largest volume lines, taking up 80% of the factory's total output, and Mike, or son Joe, spend at least one week a month on site overseeing production. The result is a trusted and reliable workforce that ship tens of thousands of pairs of boots back to the UK for inspection and distribution; arriving by the lorry load on a weekly basis. Even after getting on for 2 decades of production samples are opened from each batch to check the finished product meets Alt-Berg's exacting demands. For the output of the more recently acquired Romanian factory, where military boot contract orders are processed, every single box is opened and checked on arrival at Richmond.

With the high volume production in Italy and Romania Alt-Berg's Richmond factory, which received further investment in 2015, can concentrate on specialist and short-run lines although styles can be moved back and forth to Italy depending on demand. "All our styles are designed in Richmond, and we’ve always moved them between our factories depending on demand” says Sheehan. “The Richmond factory is unique because it can still make ‘one-off’ pairs of boots and is ideal for producing small quantities. In Richmond we have maximum flexibility. Our Italian factory on the other hand is geared towards larger quantities, but has less flexibility. So we move styles back and forth as necessary. In our Richmond factory we can still take new products from design on paper to finished boot all ‘under one roof’, and nowadays this is virtually unique in a world geared towards outsourcing, and all Altberg bootmakers are still trained by me in this factory." 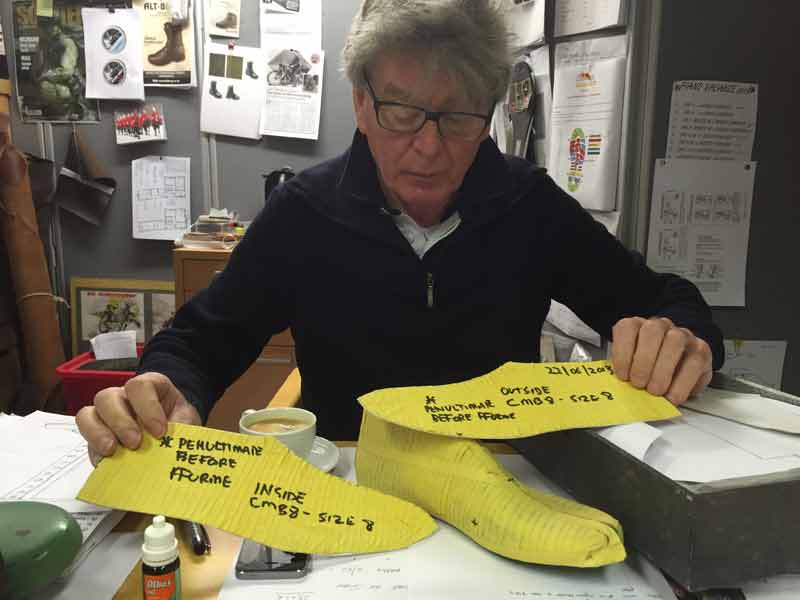 How every pair of Alt-Berg boots starts life

Over the last 20 years Mike has seen noticeable in changes in the shape of the "average" British foot. With 10 - 20 visitors a day calling in for boot fitting and alteration the Richmond staff have seen the average foot get larger and flatter. Where once the most common size was an 8 it's now closer to a 10. The shape of the toe box has also changed, with a greater drop, while somehow the heel has remained almost unchanged. The change in shape and volume has seen Alt-Berg introduce new lasts. Where the middle of 5 width fittings was once the norm the former "wide" is becoming the new "standard". 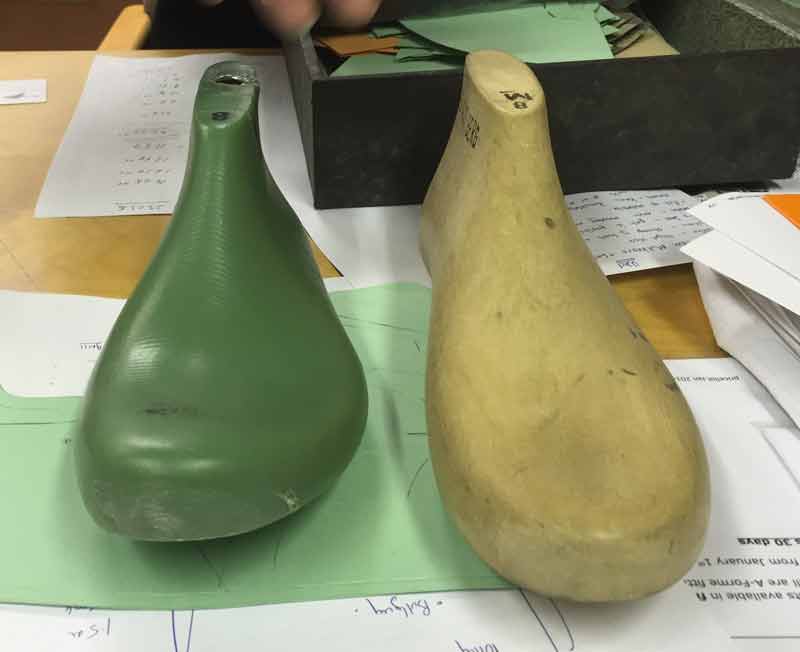 Today's last, on the left, shows how the average foot has become wider and flatter. Note the increased upward curl of the toe box.

The foundation stone upon which all footwear is built is the last. This is the foot shape around which the upper is formed. Every bootmaker develops his own lasts and at Alt-Berg Mike Sheehan produces them the old way - hand made in wood before duplicating in plastic and steel once perfected. The design of the company's A Forme last is shown in detail on the Alt-Berg website, highlighting the different processes involved in defining the shape of a boot. 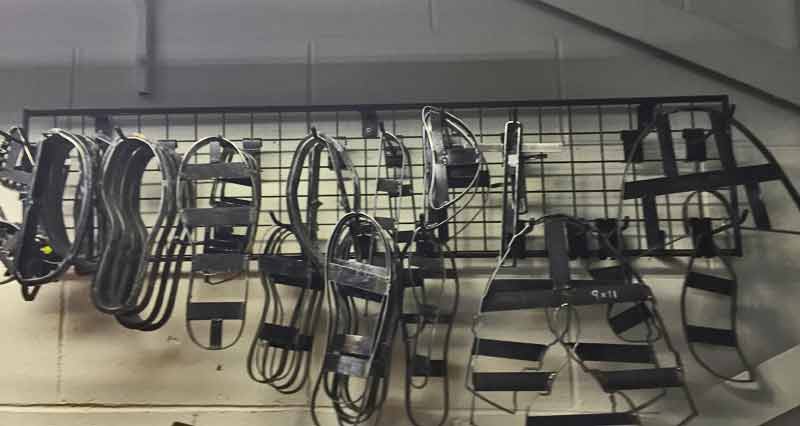 With the last decided a pair of boots comes together via a series of very specific steps, starting with cutting the leather with "knives" which resemble oversized cookie cutters. From there the uppers are assembled, with each piece matching a paper outline up in Mike's office, and reinforced where necessary. One of the surprises at this stage is that although a leather hide looks uniform at first sight there's actually a big difference in quality between the upper and lower part of a hide. The leather from along the back is much more resistant to creasing than the lower, belly, areas. To make best use of a hide the main part of the upper is taken from the upper back while the ankle cuff's softer but more crease prone leather comes from lower down. 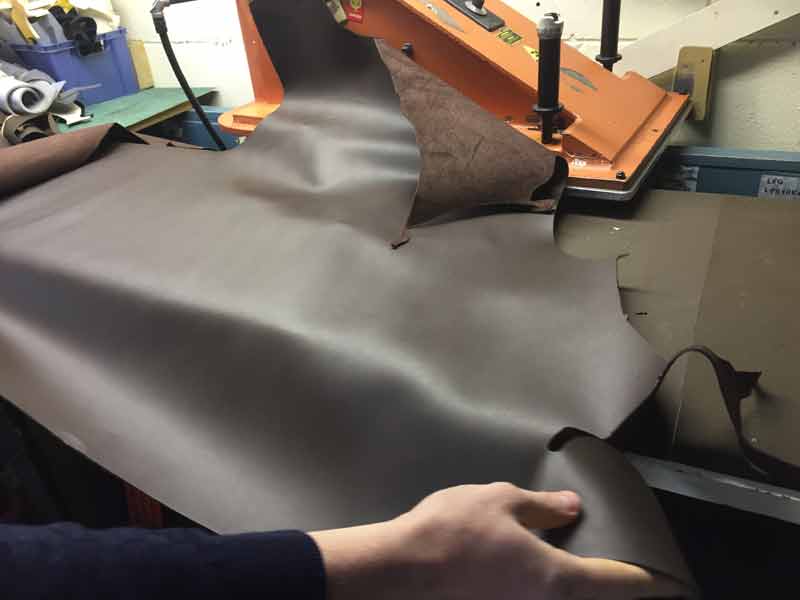 A single hide looks uniform and consistent but quality varies a lot between the upper back (straight edge side) and side or belly. 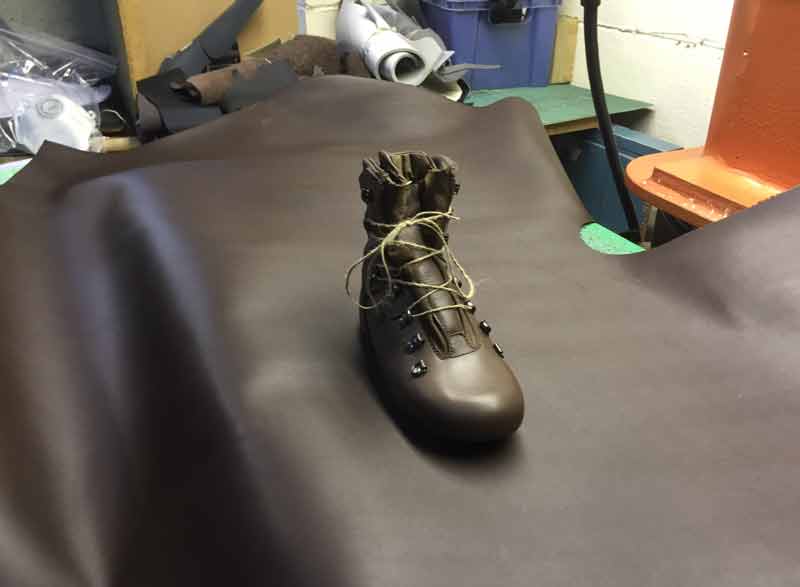 As the boot progresses from an upper to a boot it's stretched over the last and married to a midsole and sole unit. Glue, now a PU based after traditional neoprene glue caused issues in the heat of the middle east for the military, is applied and a rand added where appropriate. After passing through a bewildering array of very industrial looking machines the boot emerges to be hand polished and treated ready for sale. 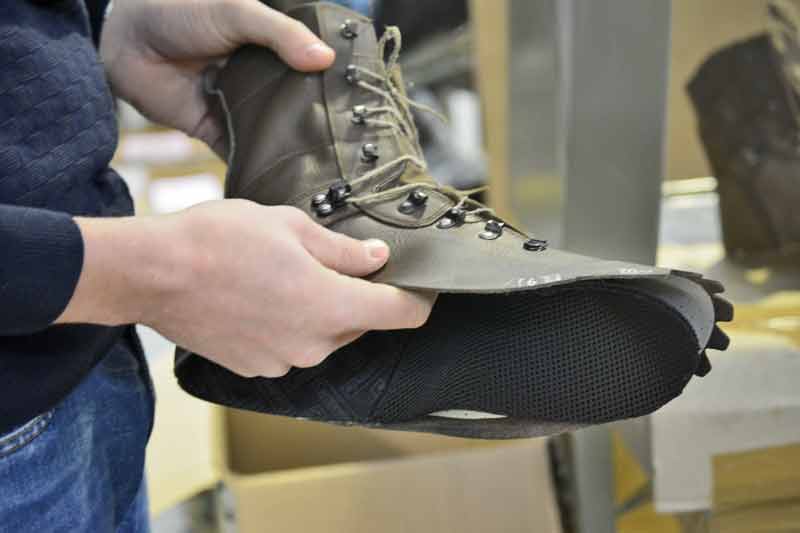 It's this intimate knowledge of every step of the process that really makes Alt-Berg unique in the UK and enables them to offer an unparallelled fitting service. While we all have roughly similar shape feet the variations in individual feet can be extreme and sometimes the only answer to getting the perfect fit is to have a pair hand-altered. At the low end this means a little carefully judged stretches but at the extreme end it can involve adding specific inserts during steaming of the leather to accommodate protuberances or serious variations from "the norm". Taken to its limits Alt-Berg can, and will, even create a one-off, purpose designed, custom boot - though this can set you back up to £2000! Simple stretches, up to half a size, come in a lot cheaper however aft £25 and upward. 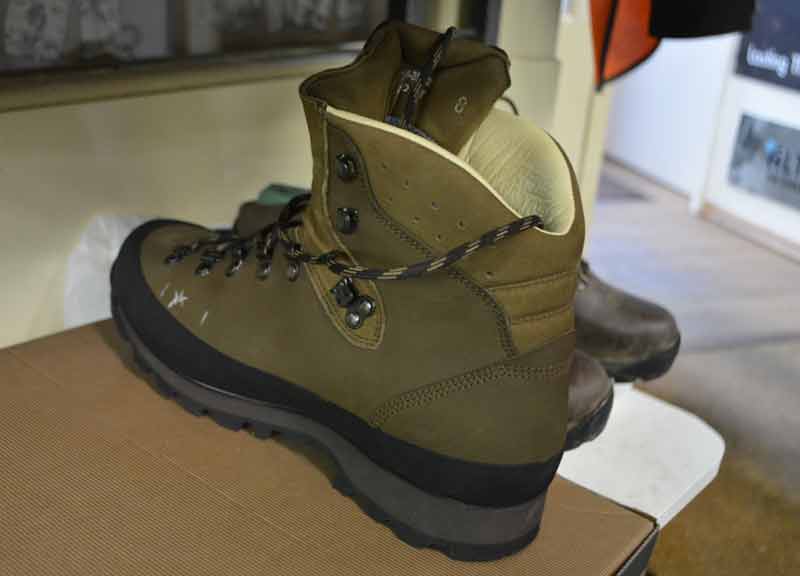 What did come as a surprise, however, was that Alt-Berg don't just offer this service for their own boots - they'll take your Meindls and Mantas too, and almost any brand of boot. Refreshingly they admit that although they make a range of 5 width fittings there are still some people for whom the Alt-Berg lasts just aren't right - and they'd rather you walked away from their shop with a competitor's boot (yes they stock other brands in their shop) than a less than perfect fit. It's this dedication to service that's seen a factory on an industrial estate in the middle of nowhere a destination. You don't see Alt-Berg adverts here, there and everywhere like many of the "big" brands because since 1989 they've been more than adequately served by word of mouth. With a focus on the quality independent retailer, Alt-Berg have grown steadily and they're proof that there's still a place in 21st century Britain for quality and service.

We reviewed the Alt-Berg Tethera last year and over the next couple of months we'll be reviewing their range of Svartz footbeds. In the meantime while Richmond isn't a "natural" place I'll be passing en-route to anywhere I'll make it a destination when I need the ultimate in outdoor footwear.

More in this category: « 8 Adventures you can try a day at a time 6 to watch in 2015 - who's going to be grabbing our headlines »
back to top

MyOutdoors @MyOutdoors
RT @londonmountain1: #ADVENTUREUNLOCKED ➡ Make sure you sign up for updates on how you can experience our awesome film programme! ✉ You'll…

MyOutdoors @MyOutdoors
RT @ParamoClothing: We've just released our fantastic new Spring / Summer 2020 range! Obviously it's tough for us all to get out at the mom…

MyOutdoors @MyOutdoors
RT @SkyriseP: We are super chuffed to announce that our big @Conway_Sean film is out now. Watch on Amazon Prime Video (UK & America only. M…