Autumn, when the light begins to fade earlier and a chill starts to fill the air. Not only the lowering of the temperature but that chilling feeling that summer is gone and all you’re left with is the memories of dusty trails, evening rides and the need for sun cream.

Well that was largely how summer 2018 seemed anyway. Of course, you can always head south like a migrating bird. Granted the temperature may not be tropical in Switzerland in September or early October, but everyone likes something to look forward to, and fresh alpine air can equal a few degrees on the happiness scale. Plus Europe’s kids are back at school so deals are there to be had and trails aren’t as busy.

My previous visits to Switzerland have been to the canton Graubünden, this time round I was heading to Obwalden notably Melchsee-Frutt and Engelberg which have the advantage of being far closer to Zurich airport. Mind you with the efficiency of Swiss trains and the related Swiss travel system nothing is to awkward to get to in the nation of watches and purple cows.

The first night of my stay was at Frutt Lodge, a striking hotel at Melchsee-Frutt designed by Halter Casagrande architects and accessed by gondola from Stockalp which passes over huge areas of bare rock covered in striations and grooves from previous glaciers. The hotel is Europe’s highest 4-star establishment, at 1920m, and the only ice I noticed was going was in drinks.   Meanwhile there is a family orientated lodge attached, designed by Philip Loskant architects, that has meal times and activities based around those with kids, and serves ice-cream. 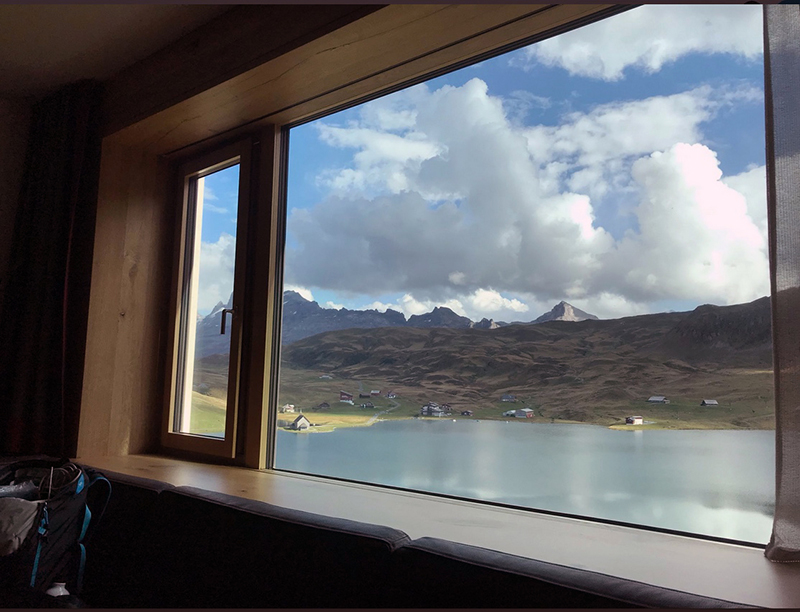 The area was originally a summer pasture for local farmers, with idyllic lush pasture around the Melchsee, surrounded by towering peaks. Even now in mid-summer the area is frequented by herds of cattle with their familiar clunking bells. However, they’d returned to winter pasture, so we were left with tranquility, fresh air and a fantastic view across to Mount Titlis above Engelberg.

But while peaceful, the hotel wasn’t deserted and seemed to be a comfy stop over for those doing long distance multi-day hikes. As a treat after several nights in spartan mountain huts I can imagine it would be like arriving in heaven, especially for those who dined in the excellent restaurant !

After an uninterrupted nights sleep it was time to fuel up then ride. Of course it’s easy to think an eMTB ride won’t need a big breakfast but faced with a breakfast bar that only European’s seem to know how to do….. I digress. 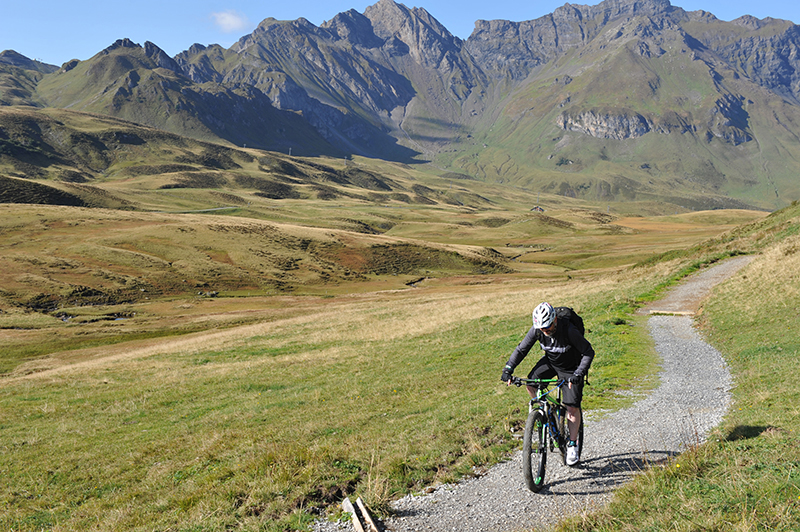 The days mission was to ride the 15 miles from Melchsee to Engelebrg via the Tannensee and Engstlensee lakes, aboard Scott mountain bikes retro fitted with the Maxon Bikedrive system from the Lodges rental fleet. I’d only previously ridden purpose designed mountain bikes so was curious as to how a conversion would work. It turns out a standard MTB is ‘chipped up’ by adding a downtube mounted battery pack offering up to 140km range, bar grip control with three power levels plus boost, and rear hub which contains the motor. On further investigation it transpired that the Maxon system is designed and made in Switzerland. So if nothing else we should run (cycle) on time.

With luggage being transferred to Engelberg there were no need for panniers or frame bags, leaving only a day pack with drink and nibbles. The route along the three lakes is a gentle ride, mainly gravel tracks with the occasional tarmac section. It’s certainly not gnarly, but what it is is very scenic especially with a blue sky and crisp clear early autumn air. You certainly know you’re in the mountains with several 3000m+ peaks close by - Sustenhorn 3503m, Reissend Nollen 3003m and Wendenstocke 3042m. At the small hamlet of Tannalp there then follows a flowy trail, interrupted by drainage bars towards Engstlensee, you need your wits about you though as there is 100m very technical rock section that the safety conscious sensibly walk before it continues as singletrack. 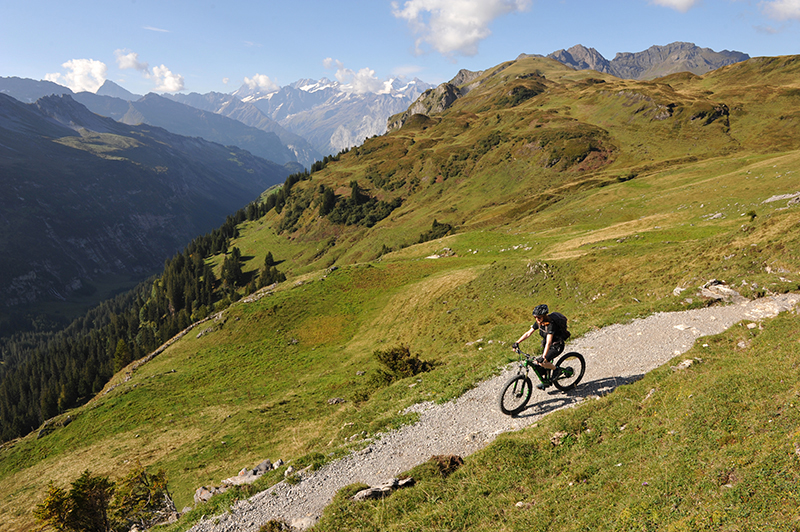 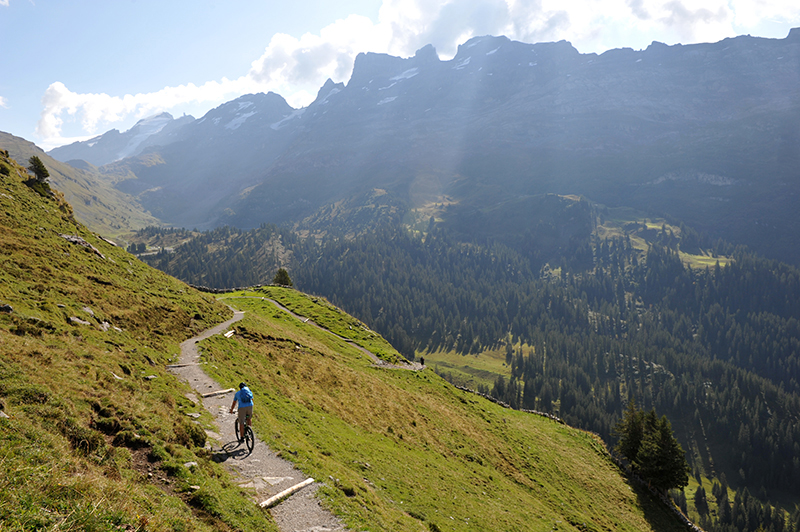 Next up is the Jochpass, Hells Bells, a trail that climbs to 2207m. Fortunately there is chairlift and with some ePower in boost mode you only have to climb relatively short distance before hooking the bike on to the uplift and enjoying the view. Hells Bells is the name of the 1700m downhill only trail down from the Jochpass to the chair, and you can ride that to your hearts content before refuelling at the top station restaurant. 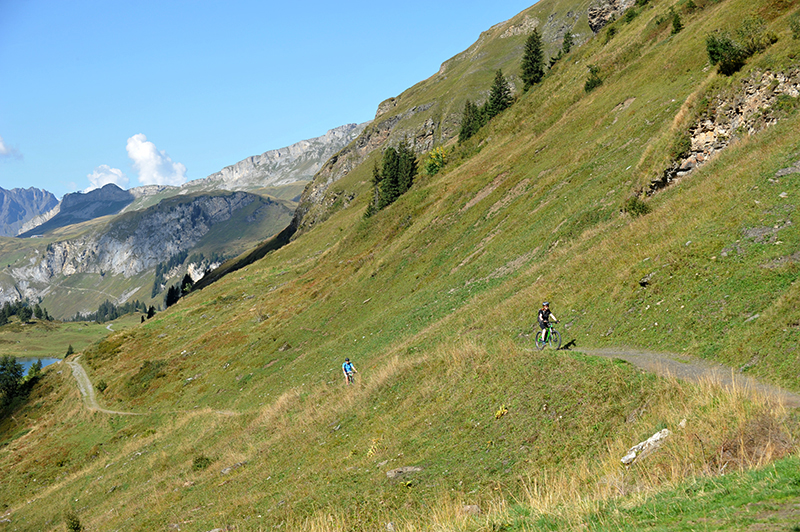 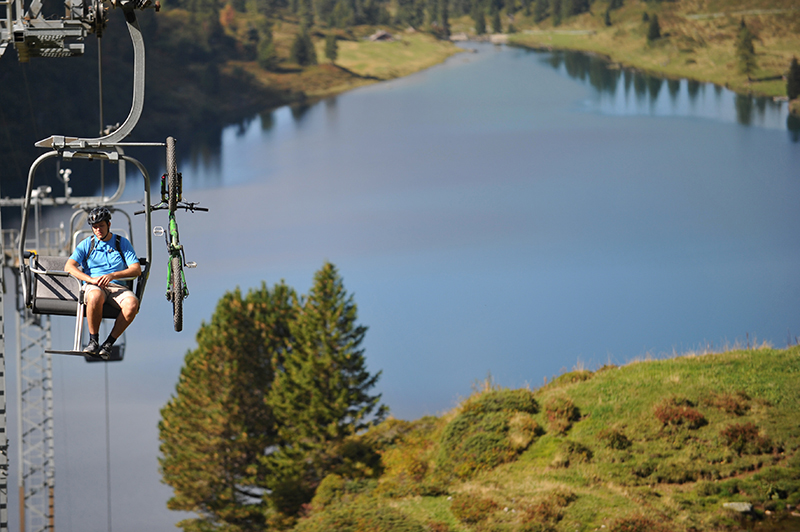 The decent to Engelberg is by way of the nearly 5km brand new Jochpass Trail which opened in July 2018, and ends at the Trübsee. It’s part of a long-term project to open up new MTB areas in the valley and utilise the existing legacy trails, used by walkers and farmers. Original scoping work and research was done by Swiss MTB trail and tourism guru Darco Cazin from Allegra Tourismus in 2014. The trail itself was designed to appeal to a broad range of abilities and drops 440m of altitude via tight turns, gentle flow, some tight switchbacks and rollers. You can’t switch off totally though and have to concentrate to get the best out of it, and with it being so new it’ll no doubt ‘bed in’ under the winter snows. 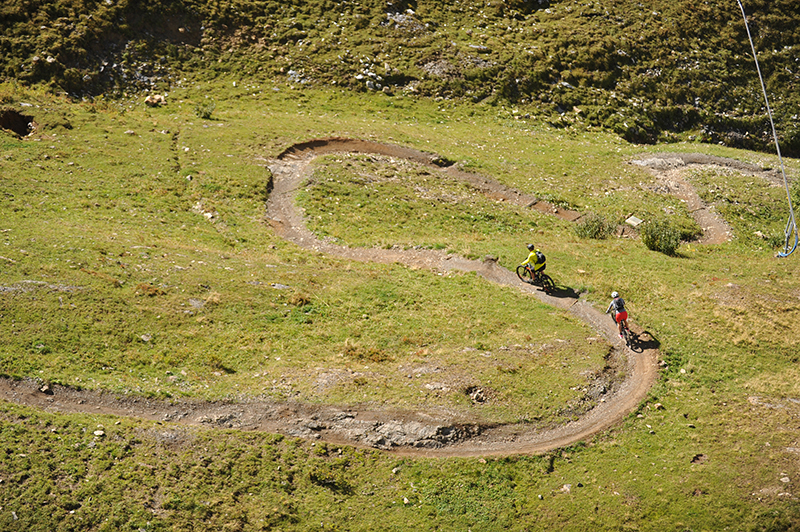 Towards the bottom of the trail is a large boulder with a brass plaque and the names of two local mountain bike luminaries, Markus Müller and Evert van Muyden, who passed away from Cancer before the trail was completed. The trail you’re riding is partly there due to their work and efforts, and the energy of many in the local MTB community. Interestingly, and in keeping with the community involvement in much of the development, the trail was blessed at its opening by local pastor Patrick Ledergerber. The area’s links to religion go back a long way; in fact it was the monastery that originally brought people to Engelberg as far back as 1122. It’s so named after angels ‘engels’ were seen above a local mountain ‘berg’. 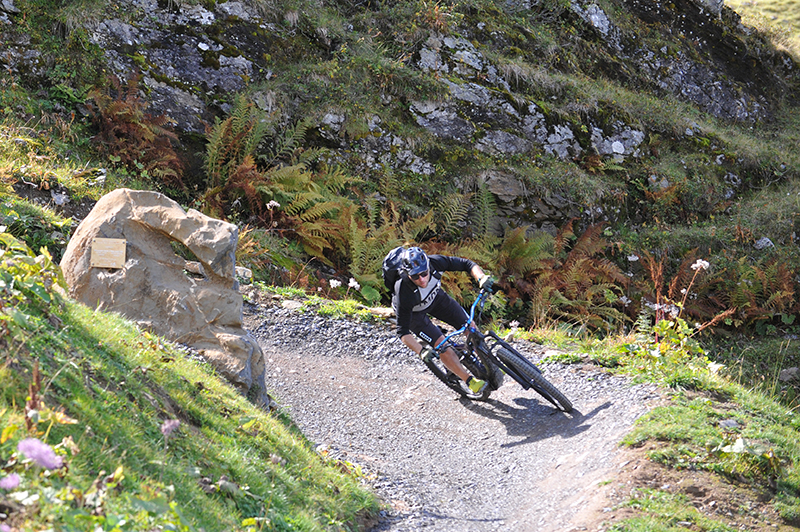 The trail down from Trübsee in to town follows a fast gravel road towards Arnialp. In winter it’s the ‘home run’ for skiers heading back from a day in the snow, in the autumn there’s no ice but plenty of gravel to add some fun drift to the corners, and it’s great fun to have a blast at the end of the day. As you enter the lush valley you’re welcomed by the sound of clunking cow bells and the smell of freshly cut meadow as the farmers prepare winter feed. 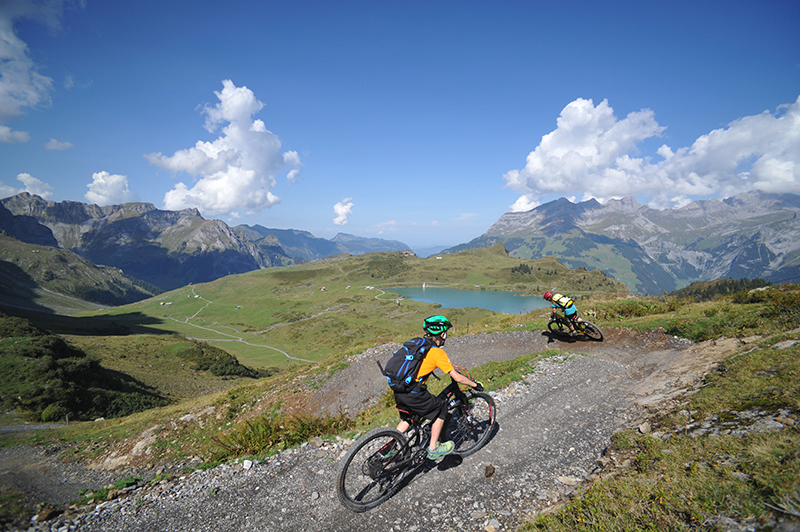 Local kids having a post school ride on the flow trail

Talking of food it was a rather nice touch to be welcomed at the Hotel Crystal with a smile and substantial energy bar that rapidly filled a hole in my stomach. Being an official Swiss Bike Hotel, means they have to have a range of facilities available such as bike wash, safe storage, tools available, and evidently it also means they know that guests arrive hungry ! I was also pleasantly surprised to see electric car and Tesla charging facilities in the car park and eco-friendly shower products in the bathroom.

The following morning we were blessed yet again with a blue sky and a forecast for temperatures in the low twenties; not bad for September. A hearty and healthy breakfast followed by some excellent coffee at Roastery Engelberg and we were all set. The plan was for a day of two halves, starting with a ride up ‘the sunny side’ to Brunni. Thankfully we were on Scott Spark eMTBs, although the previous days Maxon conversions were adequate there is no doubt that dedicated eMTBs offer a more refined ride and smoother power delivery on a more balanced frame. The road climb up to Brunni gives wonderful views of the valley, winding through meadows and woodlands before arriving at a small lake which is used for supplying water to the snow making machinery in winter. It’s surrounded by a a variety of family friendly activities, BBQ and picnic areas, a barefoot hiking trail and medicinal herb trail. And it’s also on the route to the paragliding take off point. Critically there’s a great cafe as well ! 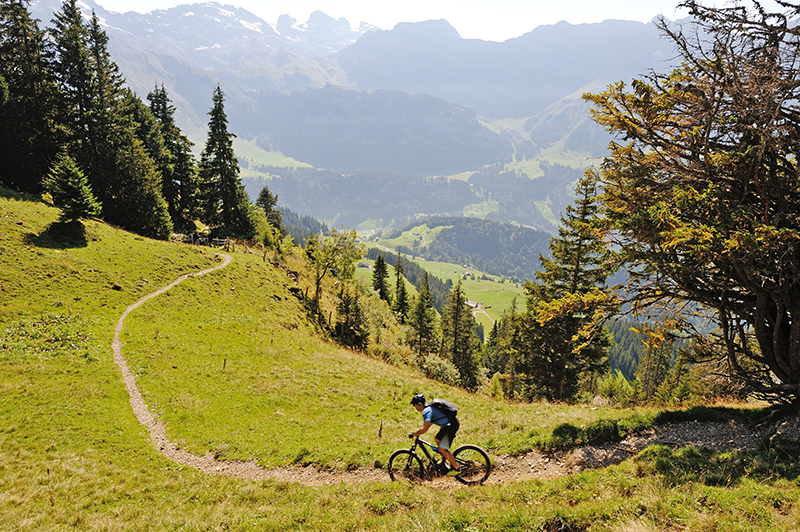 Of course it’s all about the downhill and having pedaled up the best part of 6 miles ( ok with some assistance - and we could have taken the gondola ) it was time to head down, starting with a smooth single track traverse, before heading down to Ristis and some great tight and rooty trails in the woods. Passing a trail work-team it was evident that the talk of MTB development was being put into action, which was great to see, and if we’d extended our traverse from Brunni around to Wellenberg our half day could easily have been extended in to a longer day on some excellent trails. 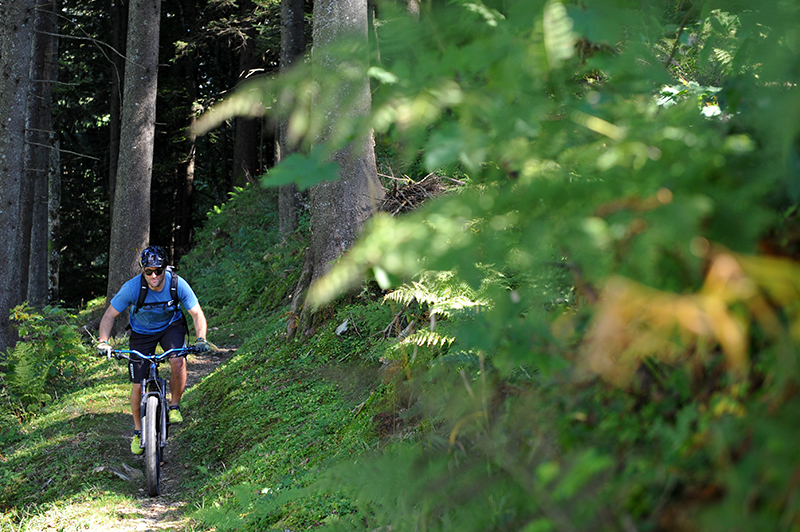 Single track in the woods descending in to Engelberg

After a leisurely afternoon and more coffee at Roastery Engelberg it was time to head up the M1. Thankfully not that notable congested motorway from London to Leeds but a trail with that code that heads out of Engelbrg to Stäfeli, a small collection of dwellings and up a dead-end valley and nestled below the imposing Wissberg (2627m) and Hahnen (2606). Under a stunning alpenglow a rather fine stew was enjoyed before a brilliant high speed off road descent to complete the 11 mile loop as the sun set not only over Engelberg but also over an excellent autumn mini break.

Transparency Notice: The above trip was provided free of charge by Swiss Tourism, Visit Engelberg and Lake Lucerne Region in combination with Swiss Air on condition of total independence and no guarantee of endorsement.

More in this category: « Vauxhall Mokka X - an SUV at home in the outdoors? Reeks District: Ireland’s Adventure Playground with Jessie Leong »
back to top