Hill walkers left out in the cold by BMC name change

Change never comes easy and after 72 years as the British Mountaineering Council the decision to rebrand as Climb Britain has caused controversy. 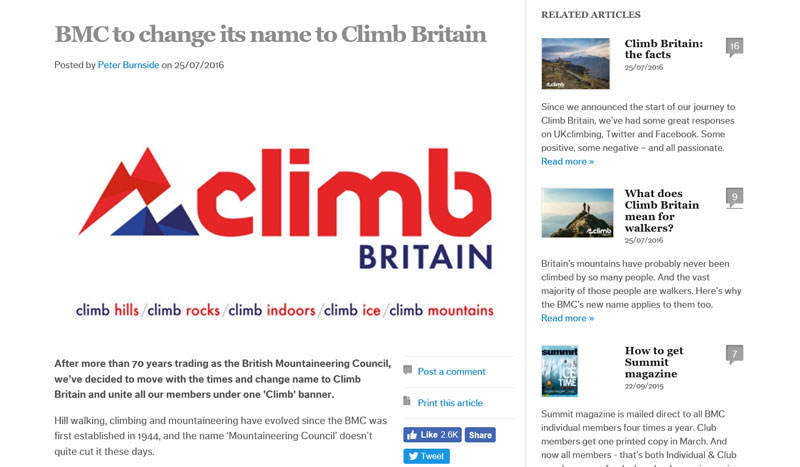 Despite the claim that . “Climb is the one word that binds all BMC members together, whether it’s hills, mountains, rocks, ice or indoor walls.” the decision has angered many hill walkers to the extent that a petition to block the change has been started on Change.org. The announcement, and ensuing social media controversy, was followed by a swathe of BMC justification with the formal announcement swiftly followed by "Climb Britain: the facts" and "What does Climb Britain mean for walkers" but the arguments and the process by which the name has been changed are unconvincing.

In their justification for the change the BMC CEO Dave Turnbull points to a "dilemma" in that the name "Mountaineering Council doesn't quite cut it these days" and in "the facts" the reasoning appears to be in being "one of the few representative sporting bodies left who use an acronym" and for some reason this use of an acronym makes it "harder to connect with younger people". How exactly "Mountaineering Council" "doesn't cut it" and with who isn't explained, nor is a causal relationship between the use of acronym and the number of members under 25 established but this perception appears to be the main basis for the decision to rebrand.

In terms of "cutting it" the name British Mountaineering Council and the history and tradition that accompany it doesn't seem to have done any harm over recent years in the corridors of power with the BMC, together with the Outdoor Industries Association, gaining support from an increasing number of MPs. Likewise the name, or acronym, doesn't seem to have put people off donating over £100,000 for conservation in our National Parks in a recent appeal.

With MCoS announcing a rebrand to Mountaineering Scotland and the Welsh section of the BMC rebranding to Climb Cymru shouldn't it be Climb England rather than Climb Britain?

In addressing the question of "Why weren't members part of the decision making process?" the BMC state "Major decisions are made by the Executive Committee (the Board of Directors) and the National Council, both comprised of elected volunteers. The rebranding proposal was unanimously agreed by the BMC Board of Directors on 18 May. It then went to the National Council meeting on 18 June, where it was agreed 19 for, 1 abstention (due to being a new member) and 0 against." While this statement clarifies the process by which the decision was made it doesn't adequately address the question as to why?

It's entirely understandable that "Major decisions" are made this way but the decision to rebrand an organisation after 72 years is such a fundamental change that the membership should expect to be consulted. The fact that the rebrand came out of the blue to the majority simply added to the questions.

The choice of the word "Climb", however, is the most contentious part of the new name. In what can only be described as a half hearted defence of the name change by the BMC's Hill Walking Officer, Carey Davies actually goes to great lengths to differentiate between walking and climbing. Stating that  "A recent survey of the activities people do in national parks found that walking was by far the most popular activity, at 59%, compared to 5% for climbing", "Britain’s mountains have probably never been climbed by so many people. And most of those people are walkers." or "And of course, walking in the hills and mountains is no less inspirational, adventurous, or life-affirming than climbing." doesn't say walking is climbing - it reinforces that hill walking and climbing are different! 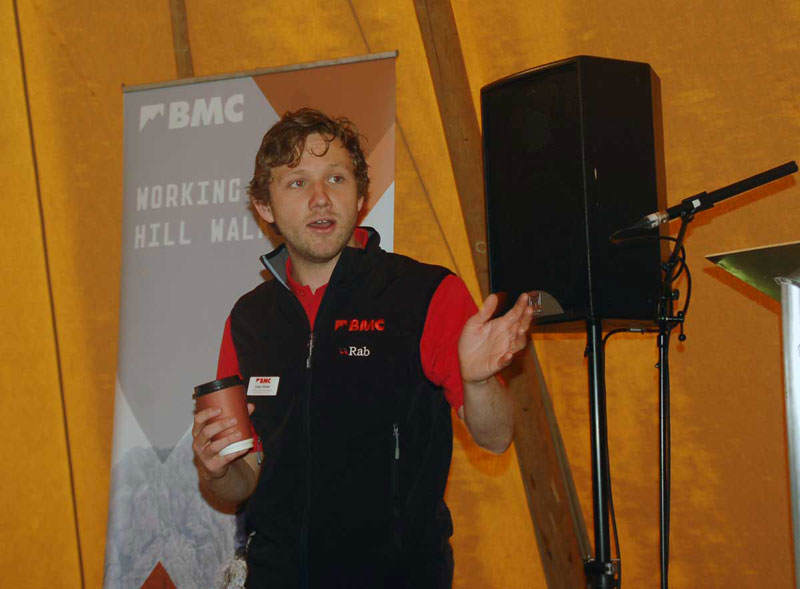 The choice of Climb Britain as a name has probably reversed 5 years of progress in engaging hill walkers. Irrespective of the semantics of whether we technically "climb" hills the perception of the name will be what matters and the word "climb" is "not going to cut it" with hill walkers. For decades the BMC had a reputation as only being interested in climbers and mountaineers and it's only in the last couple of years that hill walkers have felt relevant. The name change says everything the BMC have been trying to stop people saying with the appointment of a Hill Walking Officer and two Hill Walking Ambassadors.

Once the premise that a rebrand was needed was accepted it was inevitable that "Climb" would be seen as the dominant link between the multiple strands of the BMC's membership. While hill walking has 2 ambassadors climbing has 6, pick up Summit magazine and it's often dominated from cover to cover by climbing and check out the BMC range of subsidised courses and they're all "how to start climbing indoors/outdoors/transition from in to outdoors. Climb gets festivals from Cornwall to the Lancashire quarries. Hill walking gets one officer and two ambassadors. No subsidised navigation courses, no walking festivals.

Climbing is an easy sell and in rebranding to Climb Britain the BMC no doubt look to take advantage of the almost exponential growth in indoor and competition climbing. With the strong probability of sport climbing being in the 2020 Olympics there's no better time to jump on the bandwagon. Competition audiences provide massive membership potential in a single place at a time and by its nature competition climbing appeals most to the young - and the under 26 are a key demographic to Sport England when it comes to funding. With Shauna Coxsey's success in the IFSC (Sorry for using an acronym kids - apparently you don't like them) finally getting the national media to sit up and take notice climbing is riding the crest of a wave.

If you accept the premise that a rebrand is essential the range of sports and activities coming under the BMC's umbrella causes a bigger dilemma than the one over whether a rebrand is needed. For decades the BMC was an organisation primarily seen as being for outdoor climbers and mountaineers, with hill walking as a lesser but associated by-product. The three strands shared the key elements of outdoors and uplands with climbers and mountaineers accepting that hill walking was an integral part of their chosen sport (and occasionally a worthy pastime in its own right). When indoor climbing came along there was the obvious link with climbing/mountaineering in terms of techniques and equipment but the link to "outdoors" was broken. The numbers involved, however, and the ease with which they could be counted for statistics, were irresistible in a world where more numbers means more credibility and more funding. Success on the world stage in bouldering and paraclimbing competitions and the prospect of Olympic TV coverage simply add to the undoubted desire to keep it under the BMC umbrella, but in trying to represent what is an ever diverging range of distinctly different sports it becomes almost impossible to find an all encompassing name to describe the organisation. Mountaineering is out because it has no relevance to indoor climbing but equally a hill walker on Kinder Scout will find little in common with a chalk dusted vertical gymnast gyrating 20 feet above an inner city foam mat.

If you accept that rebranding is necessary you have to look at exactly what it is you represent and whether the more disparate components of the organisation would be better served by having their own body. Does hill walking share enough with climbing in its other forms to naturally fall under the same banner? Is indoor competition climbing so divorced from alpine and mountain climbing conditions as to be better off with its own national body? Would the BMC actually be better as an overall body under which Climb England, Climb Cymru, Mountaineering Scotland, Walk England, Walk Cymru and Walk Scotland operate autonomously, acting as a governing body on the political stage and in setting safety guidelines while devolving funding and organisation to more specific regional bodies? These are the questions that a decision to rebrand inevitably raise, which begs the question is it necessary at all? In an era of decentralisation is it right that out of 82,536 members such a fundamental decision was made by just 20 people without the majority of members even realising it was on the agenda?

More in this category: « Keeping the momentum going after the flood BMC to widen debate but questions remain »
back to top