Adventures on The Cambrian Way - North to South by road. Stage 1

While the new Cambrian Way walking route has taken the headlines this summer Visit Wales has also designated a Cambrian Way road running between Llandudno and Cardiff.

The route between the north and south coasts of Wales is far from the fastest road in the country but there's a reason for that, and that reason is why the new Cambrian Way is a road trip with unique appeal. Following the A470 between Llandudno and the outskirts of Cardiff you get a glimpse of the diversity of scenery; stop a while along the road and you'll find adventures at every turn. From the beaches of the North Wales coast with kite surfing to kayaking in the heart of Cardiff Bay the road traverses two national parks, crosses the sparsely populated “Desert of Wales” (an area of wild morrland) and ends in the industrial and economic heartland of South Wales at the national capital.

With all this diverse landscape the opportunities for adventure are equally diverse, and in many cases unique. From the fastest zipline in the world to a unique inland surfing lagoon or an alpine style simulated toboggan run there's something different at every turn. Along the way the landscape itself is an attraction. Every year tens of thousands of walkers head to the hills and mountains of Snowdonia and the Brecon Beacons - as different geologically and topographically as you can get but with a common appeal or take to two wheels at international standard mountain bike centres. 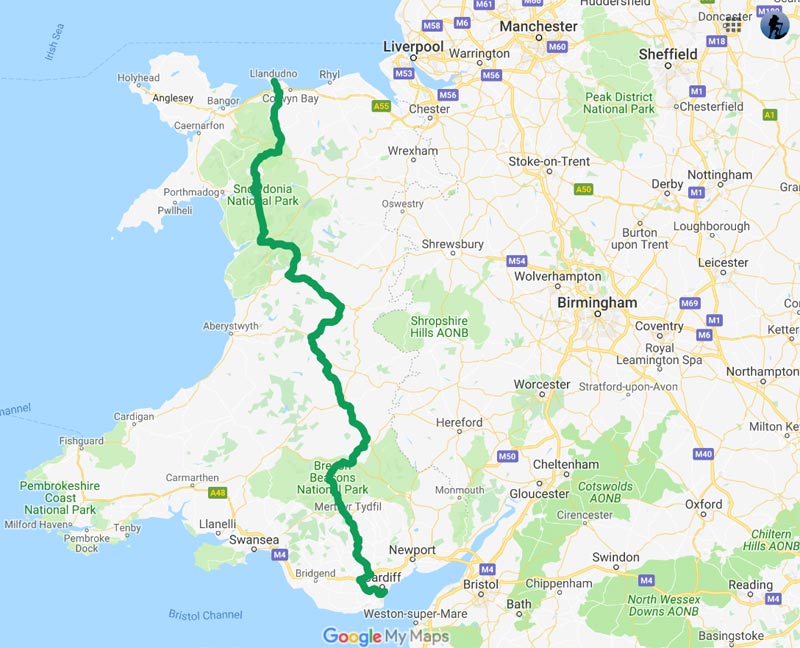 The Cambrian Way naturally divides itself into 3 distinct stages; Snowdonia and the mountains of the north, the central area typified by vast tracts of sparsely populated moorland, and the southern section of the Brecon Beacons and "the valleys". Each stage has its own distinct landscapes and its own unique series of adventures to be had within a few miles of the Cambrian Way. To do the whole route justice would take a week and breaking it into stages is ideally suited to a series of adventure-packed long weekends. For the research on this piece we started our journey in Llandudno in a micro-camper with three full days to reach Dolgellau and the Mawddach Estuary. 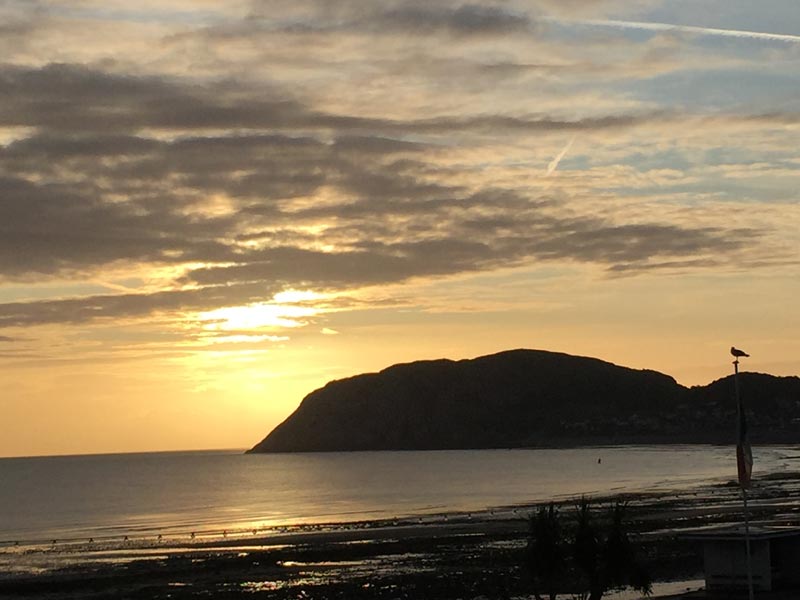 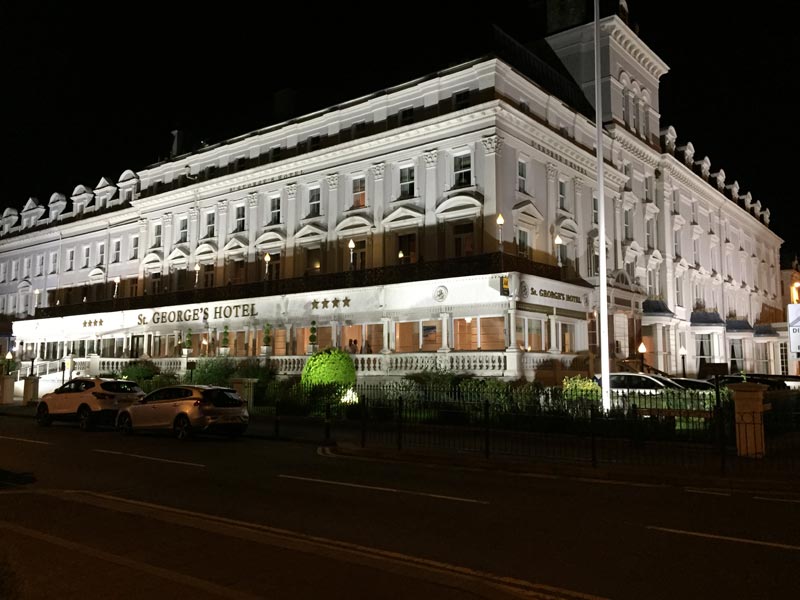 If you're planning a long weekend for this stage be prepared for some serious logistics - there's enough in this part of Wales to keep you for a week, never mind a long weekend. The chances are you're going to have to pick and choose carefully, and look at timings to extract the maximum from each day. By the time you've reached Betws y Coed, you've had options including ziplines and an alpine style toboggan run, surfing, indoor caving and an indoor adventure hub with an outdoor wall.  Add inSnowdon, the highest mountain in Wales, Zip World's second zipline complex and a choice of underground adventures in the abandoned slate mines and you'll start to see the problem with fitting everything in. With the UK’s first dedicated mountain bike trail centre and a stunning walk along the Mawddach Trail for the last part of the stage there's no shortage of diversity.

OK it's a bit of a detour but if you want to take in the world's fastest zipline it makes sense to start out with a trip to Zipworld's Penhryn Quarry complex - home of both Velocity 2 and the new Quarry Karts. Penhryn Quarry is where the Zip World story began with the original velocity zipline, from where it's gone on to open a second complex at Blaenau Ffestiniog and a seperate woodland adventure with ziplines and Fforest Coaster - a bobsled on rails.

The main attraction at Bethesda has always been the ziplines, first with the original Velocity and now with the four-line Velocity 2 which pushes the speed up past 100mph as you fly over the lake below.

The Penhryn Quarry site also hosts a new addition in the form of Quarry Karts - an import from the alps where you pilot a 3 wheeled cart down quarry tracks over a 3km course. Think bucket seat, bicycle brakes and no suspension; it's fast, furious and comes with chicanes and a pair of tunnels. (Note GoPro filming is not normally permitted).

Starting the day early and putting ZipWorld behind you the obvious route back to the Cambrian Way would be the A5 but the alternative takes you through Llanberis and past Snowdon............If you've got your logistics right and pre-booked, or you're fortunate enough to get an empty slot, there's the famous Snowdon Mountain Railway.

The climb to the 1.085m high summit can be spectacular, whether on foot or on the popular train, but there's no guarantee with the weather and when it gets wet on Snowdon it gets seriously wet! 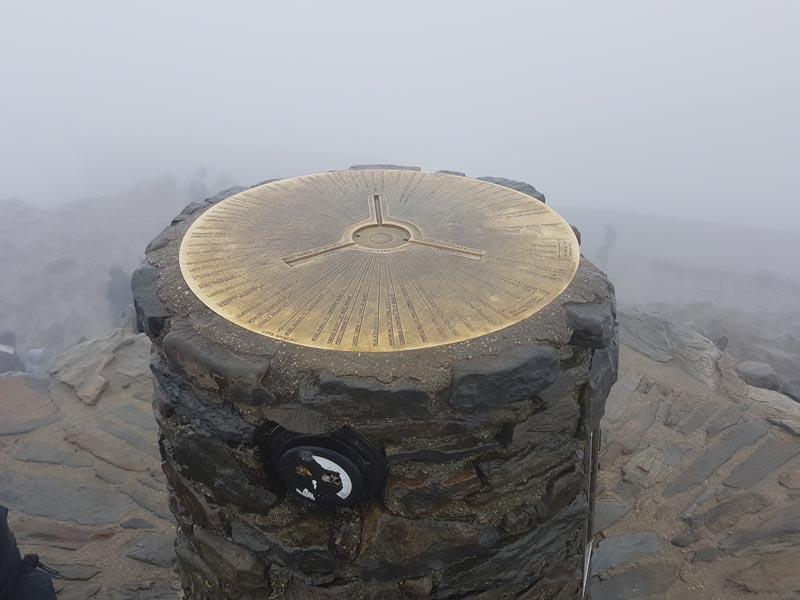 If you've got the timing right it makes sense to check out the Fforest Coaster just north of Betws y Coed. 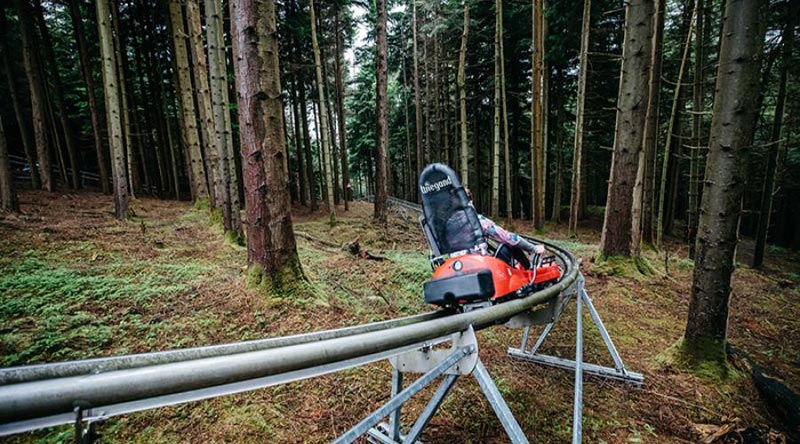 and that's just one day!

If you want to stick closer to the Cambrian Way and skip Bethesda and Snowdon the drive south from Llandudno takes you down the Conway Valley and a short diversion over the river brings you to one of the area's newest adventure based attractions in the shape of Adventure Parc Snowdonia.If you've followed our route and done Velocity, Quarry Karts and Snowdon as anti-intuitive as it may seem to be temporarily heading back north it really is worth it.

Formerly Surf Snowdonia, Adventure Parc Snowdonia is something unique, not just for the area but worldwide. Water from a hydro electric scheme above the site is diverted after turning the turbines to a lagoon adjacent to the river. Here it powers the world's only inland surf lagoon. Post use the water is then UV treated and continues its way to join the River Conway.

As it turned out the lagoon was empty when we visited and, to be honest, it was slightly reluctantly that we diverted north and back towards our start point but with a pressing schedule for the afternoon ahead it was difficult to tear ourselves away after just a couple of hours. The name change to Adventure Parc from just Surf Snowdonia makes a lot of sense now. Far from being just about the water the centre acts as both a hub for outdoor adventure sessions scrambling, climbing, mountain biking and more but also hosts an impressive indoor adventure centre. Ideal for when the rain's falling outside the centre has everything from Europe's longest indoor cave to rope drops. There's slides and ball pits - when I say slides forget your playground type of slide, we're talking 80 degree slides! As an ex-caver I wasn't expecting much from the "indoor cave" but was more than pleasantly surprised at its scale; most of the images are crawling height but there's plenty of places with the height to walk, and a "rock slide" into a ball pit simulating a water pool. 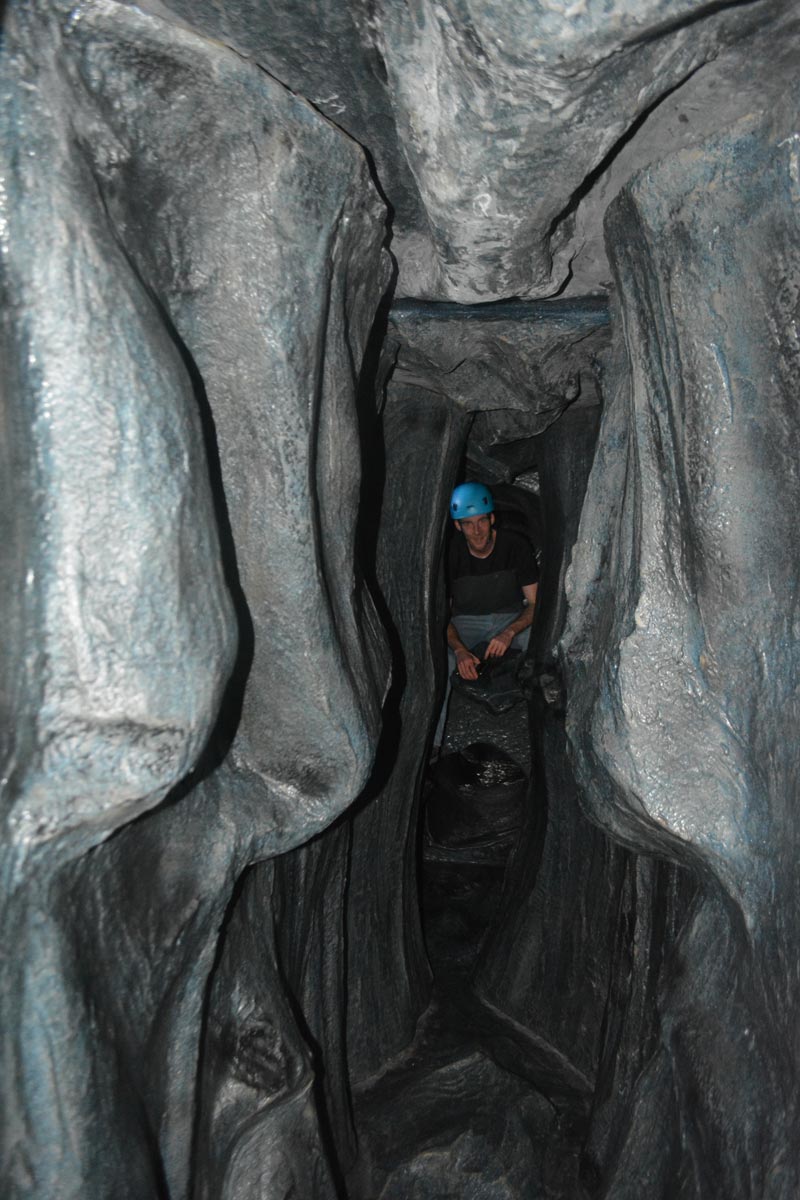 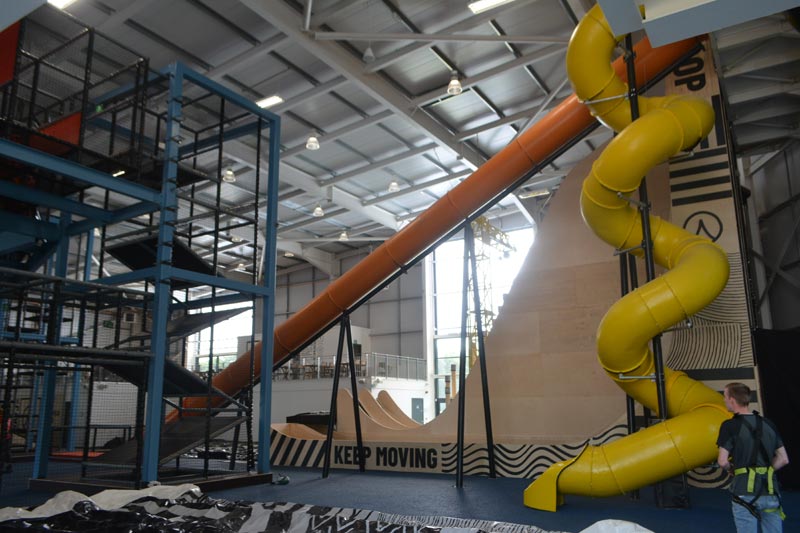 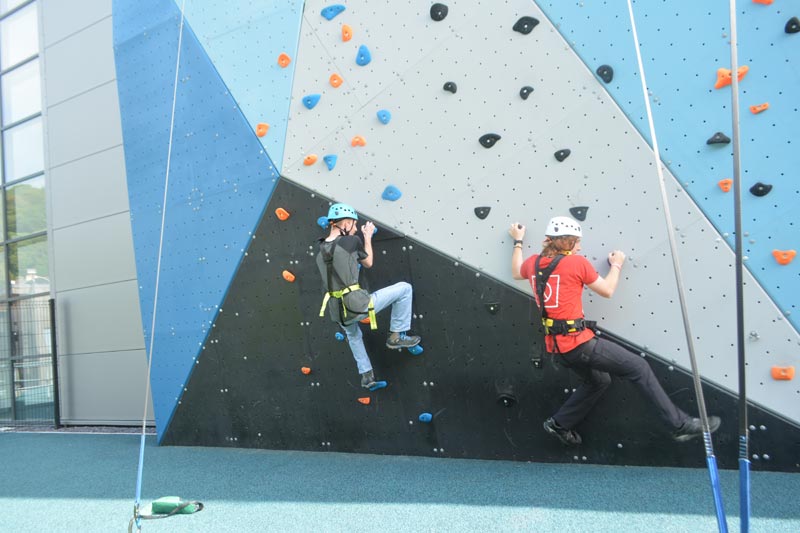 Heading south again the next adventure is Go Below and something a step up on the adventure scale. With options ranging from 5 to 7 hours you're going to need to set most of, if not all of, a day for this underground experience.

Onwards and southwards and it's Zip World part 3. Amongst the post industrial landscape of Blaenau Ffestiniog Zip World and Llechwedd Caverns have built another world of ziplines and underground adventures. Where Penhryn Quarry had the fastest zip, Blaenau Ffestiniog boasts the biggest with three seperate sets of lines to go from the top to the bottom. Below ground there's a series of super-scale trampolines spread across multiple levels, leading to an optional course of ziplines and rope bridges - all under coloured lights. 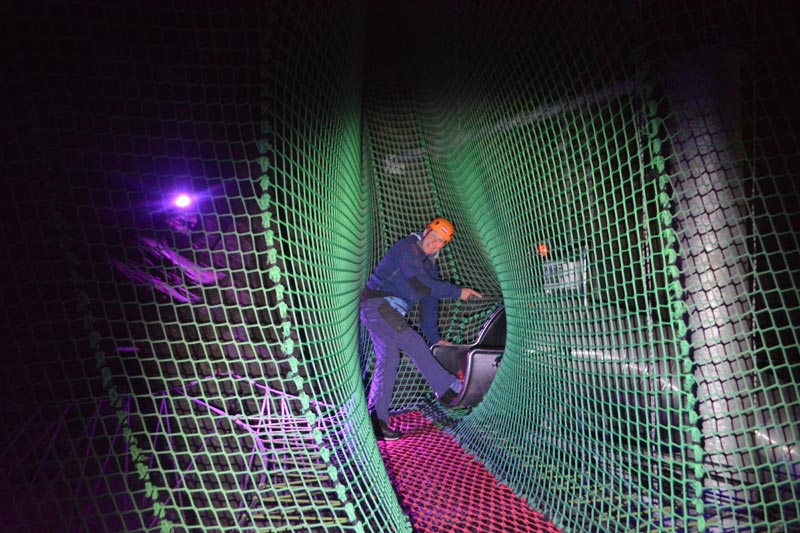 With the exception of Penhryn Quarry and Snowdon the adventures have all been within a couple of miles of the Cambrian Way and to follow the habit Coed y Brenin lies on the way south beyond Blaenau Ffestiniog. Here you have world-class mountain bike trails, family walks and running trails for all tastes and fitness levels.

After a very full few days the final leg of stage one follows the road to Dolgellau, under the shadow of Cader Idris. If you're looking for a relaxing conclusion to the first stage you could do a lot worse than drive a few miles west along the A493 to Penmaenpool and the Mawddach Trail. Here a gentle walk along the banks of the Mawddach estuary gives spectacular views as it winds its way to the famous barmouth Bridge. It's one of those spots that it would feel like a crime to miss if you find yourself so close. 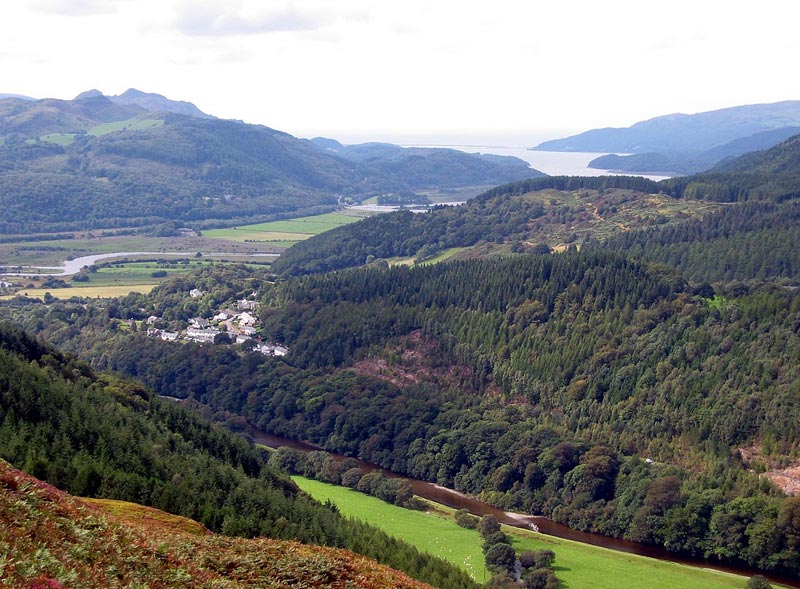 By The original uploader was Shropman at English Wikipedia. Transferred from en.wikipedia to Commons.

Transparency Notice: While none of the activities mentioned have contributed financially or in kind the research for this feature was funded by Visit Wales

More in this category: « Reasons Why Van Living/Travelling is Becoming More Popular Cycling a Continent: an Irishman's Adventure through Africa »
back to top

MyOutdoors @MyOutdoors
"Every generation has its own path. Even when following in the footsteps of predecessors, one's individual experien… https://t.co/RtLCawBmxz

MyOutdoors @MyOutdoors
Sad to hear Harry White is moving on after 7 years with @MySwitzerland_e . It's been a real pleasure Harry and than… https://t.co/pTNKwt3MqS

MyOutdoors @MyOutdoors
RT @Fionaoutdoors: What rubbish in a press release from @LandRover and with quote from ambassador @KentonCool Did he get to read the press…