A cross-Irish Sea set of collaborative counties in Ireland and Wales has formed a partnership to deliver a new tourism heritage project known as the ‘Celtic Routes’, aimed at bringing Celtic culture, spirit and soul to a new audience.

The Celtic Routes has been borne out of partnership between six Irish and Welsh counties encouraging visitors to ‘go deeper, stay longer’.

The relationship between the two Celtic nations has been formed on the basis of an unbreakable bond formed through their shared heritage of untamed landscapes, ancient crosses, chapel ruins and sacred stones.

Irish migrants who settled in Wales in the 5th century left their mark through the Ogham stones that still line the Welsh coastline today. And in return, Wales gave St Patrick to Ireland – or so they say. 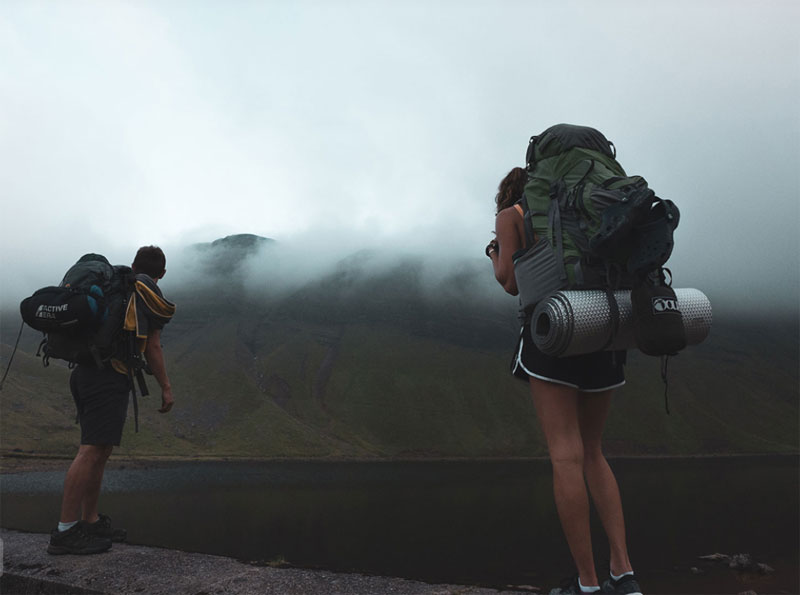 The Celtic Routes aims to showcase this primal relationship to new eyes and ears, to new visitors who will discover untamed nature and roads less travelled, that still follow the pulse of the changing seasons and rhythms of the natural world. And where legends of saints, giants and princes will transport visitors to whole new worlds.

The Celtic Routes partnership is comprised of the coastal communities of Carmarthenshire, Ceredigion, Pembrokeshire, Wicklow, Wexford and Waterford, who have joined forces to deliver a selection of curated travel experiences in order to encourage visitors to Ireland and Wales to discover the Celtic Spirit by offering a number of immersive and authentic Celtic experiences.

Each of the six partner counties has put forward their five best Celtic Routes ‘experiences’ under the title Celtic Beacons. The Celtic Beacons are the places where you’ll find the sights, sounds and stories that shaped these beautiful parts of the world. Each Beacon reveals a snapshot of a particular moment in Celtic history, whether it was 2,000 years ago, 200 years ago or in living memory. They include:

When it comes to lighthouses, none come with a longer history of protecting seafarers than Hook. It’s the world’s oldest operational lighthouse, having stood for over 800 years. 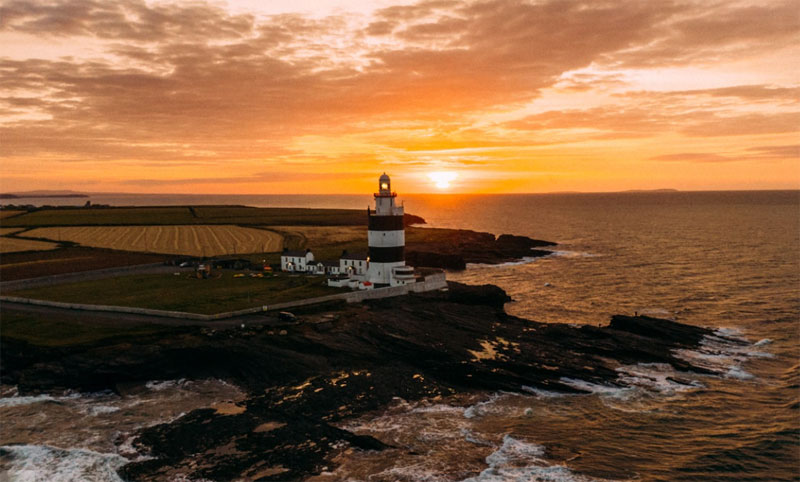 Dylan Thomas Boathouse, Carmarthenshire – the home where the iconic writer lived in the final years of his life

It’s almost impossible to mention the town of Laugharne without mentioning ‘Dylan Thomas’ in the next breath. He is synonymous with the place – he lived here, loved here, drank in many of its pubs and is buried in the graveyard of St Martin’s Church. And no visit to Laugharne is complete without a pilgrimage to The Boathouse, where Dylan lived with his wife and family in the last years of his life. 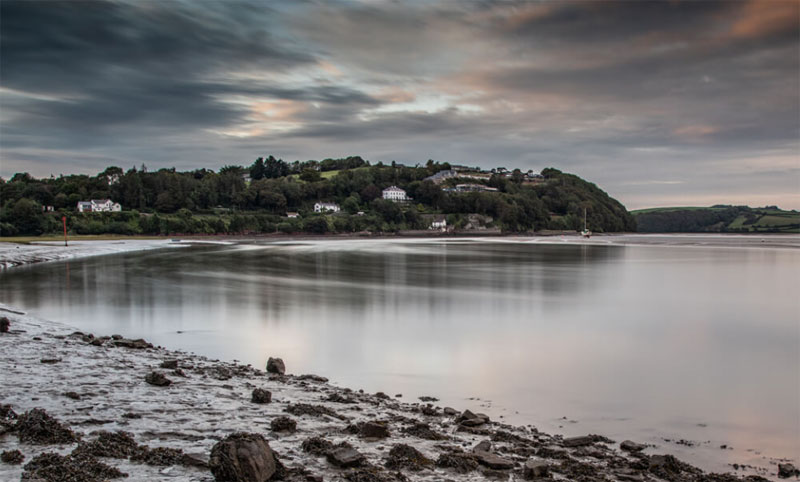 Pembrokeshire Coast Path, Pembrokeshire – twists and turns for 186 miles from St Dogmaels in the north to Amroth in the south. It covers almost every kind of coastal landscape, from volcanic rock headlands, limestone arches, blowholes and sea stacks, to narrow glacial inlets.

2020 marks the 50th anniversary of the Pembrokeshire Coast Path, considered one of the most iconic walking routes in the world, with a year-long programme of events aimed at encouraging more people to access and enjoy Pembrokeshire’s greatest outdoor asset.

The Pembrokeshire Coast Path is one of the most beautiful stretches of the 870 mile long Wales Coast Path, which also plots a course through the other Welsh Celtic Routes counties of Ceredigion and Carmarthenshire. It is the first of its kind in the world to encompass the coastline of an entire country. 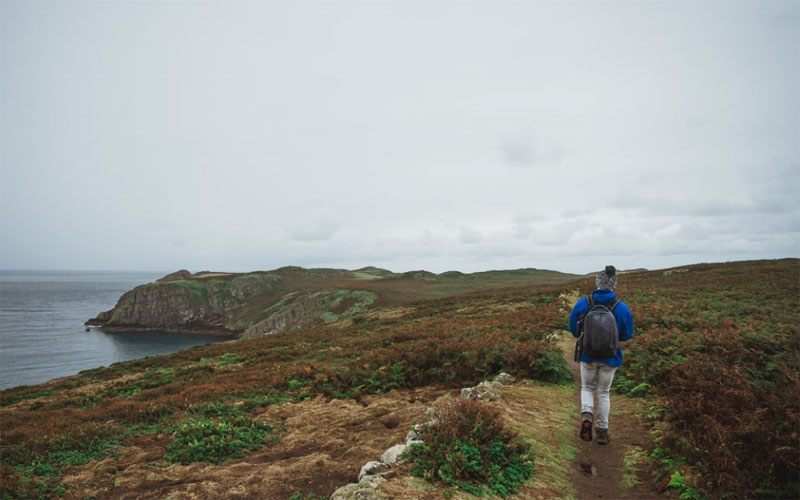 In support of the Celtic Beacons, the six counties have also each suggested three Celtic Moments, which allow visitors to get even closer to the Celtic experience. They have been chosen to showcase the times and places where the connection with the past, the land and the spirit is heightened.

The Celtic Moments include a specific location and perhaps a time of day, or time of the year, to give visitors the knowledge that they are discovering the Celtic spirit at the time when that experience is at its peak. Highlights include whales breaching at Hook Head, seal spotting at Cemaes Head and the Aberaeron Mackerel Fiesta. They include:

Walking along the Wicklow Way, Wicklow – known as the Garden of Ireland

Just south of Dublin, County Wicklow – known as The Garden of Ireland – is a wild expanse of coastline, woodland and imposing mountains through which runs the country’s most popular walking trail. The Wicklow Way is Ireland’s oldest marked trail, the brain-child of famous hill-walker J B Malone, which opened in 1980. 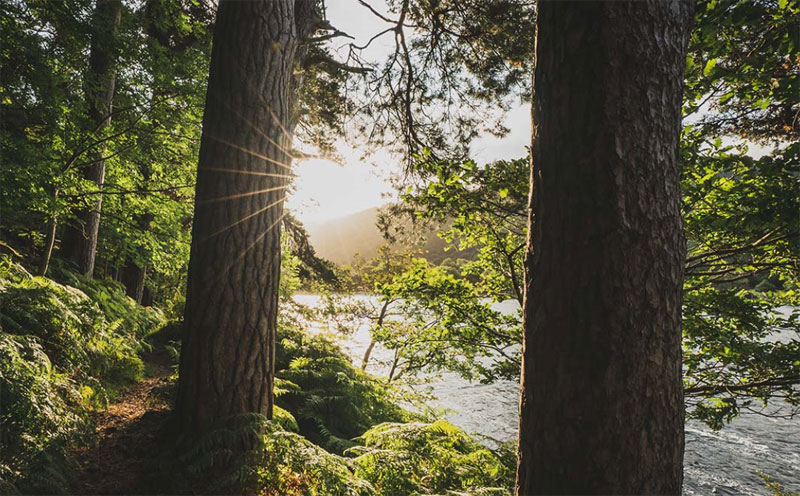 Dolphin spotting off New Quay, Ceredigion – it’s possible to see bottlenose dolphins here all year round, but your prospects are best in the summer when there’s plenty of mackerel in the waters to be eaten.

Cardigan Bay is famous for its bottlenose dolphins, with a resident population of around 250. They’re drawn here by the abundant feeding grounds, the undisturbed habitat and the clean waters.

In the 5th century, St Declan came across the village of Ardmore – it’s said he was guided there by a stone carried on the waves - and founded a monastery. Its ruins are Ireland’s oldest Christian settlement. Today, a number of sites remain of his monastic city. 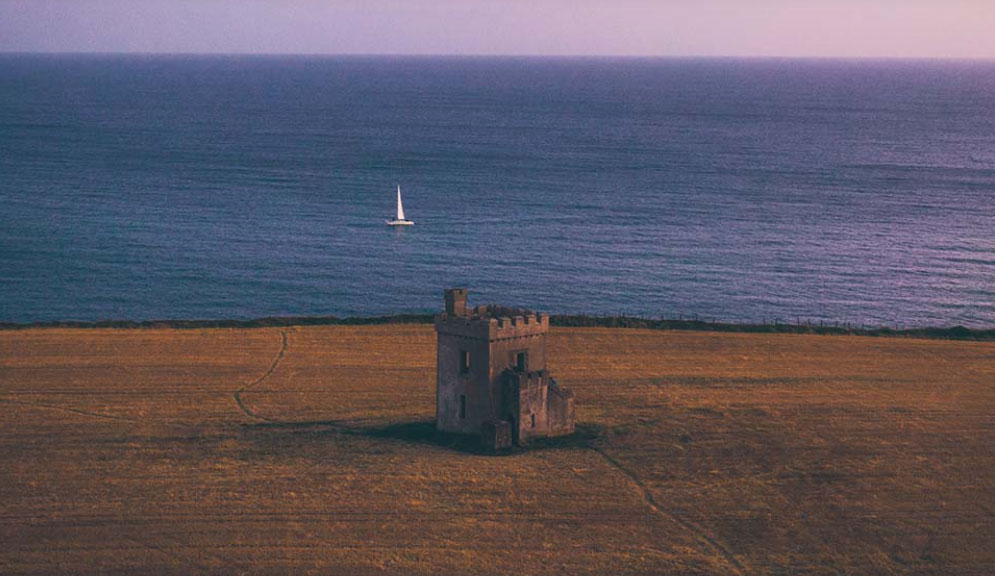 In total, the Celtic Routes are comprised of 78 visitor experiences that can be enjoyed across the six counties, affording tourists the opportunity to really explore these beautiful and spiritual corners of west Wales and eastern Ireland that act as almost mirror images of each other from across the Irish Sea, characterised by long, unspoilt beaches, lush rolling countryside and, rising up in the distance, dramatic mountain ranges.

Tourists will be placing a great emphasis on the exploration of lesser known destinations in a bid to reduce over tourism and safeguard the environment.

This is exactly what Celtic Routes is all about. The discovery of lesser travelled spots away from the tourism honeypots.

So if you’re looking for second city options, why not try St Davids, the smallest city in the UK, and Waterford, the oldest city in Ireland?

The city of St Davids and St Davids Cathedral, Pembrokeshire – the smallest city in the UK and the resting place of the patron Saint of Wales

The westernmost peninsula of Pembrokeshire is dominated by the city and cathedral of St Davids. The tiny coastal city is the smallest in the UK and is home to the resting place of Saint David, or ‘Dewi Sant’ in Welsh, patron saint of Wales. The cathedral has stood as a place of holiness and pilgrimage for over 800 years. In medieval times, it was said that two pilgrimages to St Davids were equal to one to Rome.

The present cathedral is built on the site of the 6th-century monastery Saint David founded to teach missionaries to spread Christianity. It’s believed one of those missionaries was St Patrick. As Saint David’s reputation spread, his monastery grew and a community developed. Unfortunately it also drew the attention of the Vikings, who plundered it many times over the next few centuries. The Normans eventually took over the monastery and began building the current cathedral in 1181.

Having survived the collapse of its tower, an earthquake and the Reformation, the cathedral continues to enthral and inspire its visitors, even after 800 years. 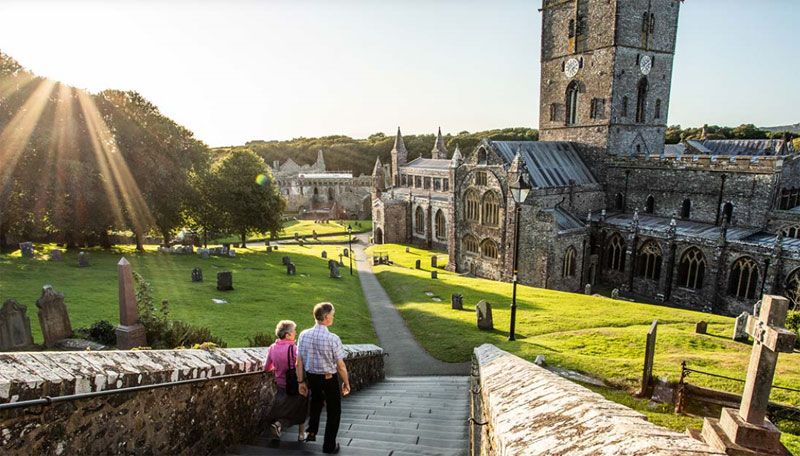 Ireland’s oldest city, Waterford was first established in 914 by a larger fleet of Viking invaders. While there’s no doubt that they were drawn to Ireland to raid the rich monasteries, the Vikings were a lot more than just rampaging warriors.  As time went on, they settled, forged alliances and established trading routes – and became an important part of Ireland’s story. The Waterford Viking Triangle, part of the city’s cultural and heritage area, sits in the original footprint of the settlement. It’s said that there’s ‘1,000 years of history within 1,000 paces’, with a trio of museums showcasing the city’s Viking, Medieval and Georgian history. 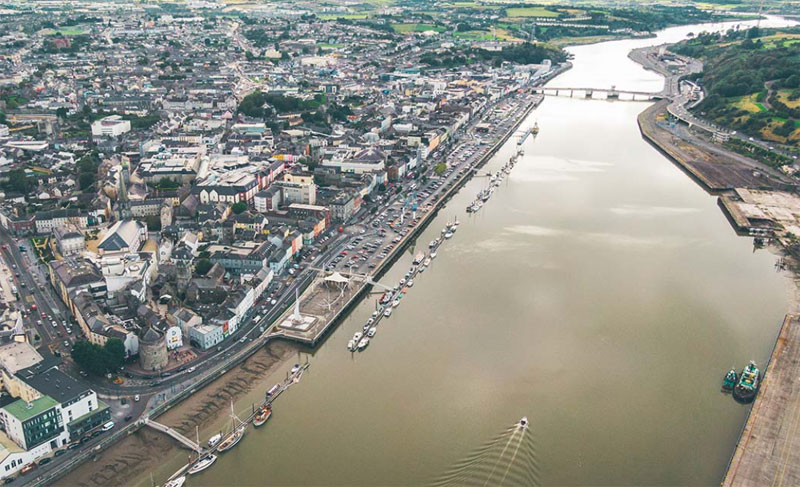 It may feel like it hasn’t stopped raining since September at times, but across the Celtic Routes that means one thing – some epic waterfalls!

The counties are dotted by a number of beautiful falls, both big and small. From the enchanting and gently cascading waterfalls that tumble down the valley from the spectacular glacial lake of Llyn y Fan Fach, to the impressive force of nature that is Cenarth Falls, which roars spectacularly when the river is in full flood.

On the borders of three counties – Carmarthenshire, Ceredigion and Pembrokeshire – is the charming village of Cenarth. Its main attraction since Victorian times is the cascade of waterfalls on the River Teifi. In autumn, visitors come from far and wide to watch the fascinating spectacle of leaping salmon. This natural phenomenon sees migrating salmon fighting to clear the falls and get upstream to spawn. Cenarth is also one of the few places left in Britain where coracles are still used. Fishermen use these small round-bottomed boats, made of woven willow or ash and covered with a waterproof material, to drift down the river and catch salmon and sewin. 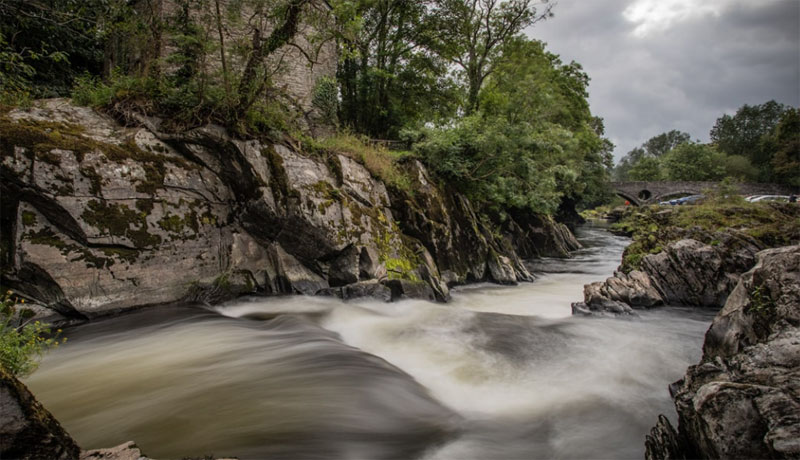 Devil’s Bridge, Ceredigion - Three separate bridges span the 90m waterfalls of the River Mynach – one built on top of the other between the 11th and 19th centuries. According to the legend, the original bridge was built by the Devil as it was too difficult a task for mortals. He agreed to build the bridge in exchange for the soul of the first being to cross the bridge. However, he was outwitted by a canny old woman and banished from the country forever. 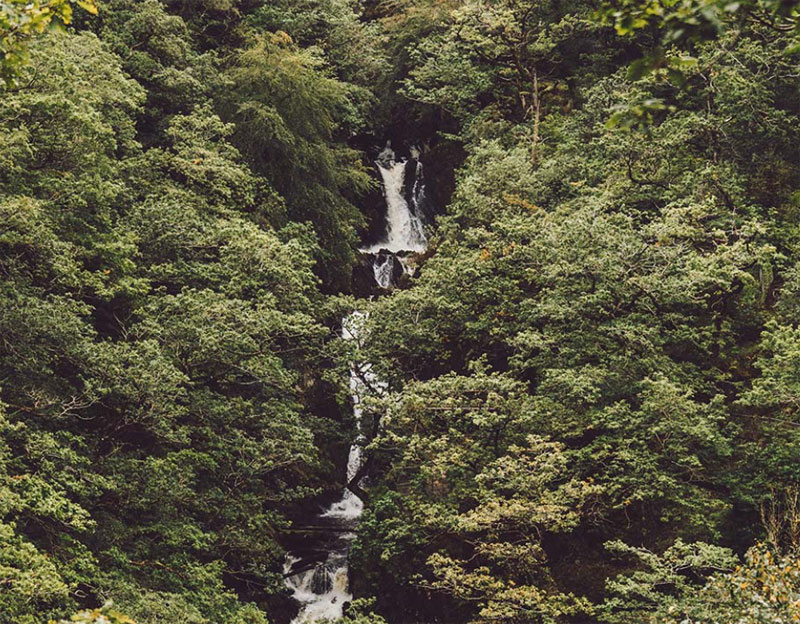 Teifi Pools, Ceredigion - On the high plateau for the Cambrian Mountains, near the remote Teifi Pools, one of Ceredigion's secret waterfalls cascades into a tranquil pool, where, legend has it, a giant used to wash his hands. 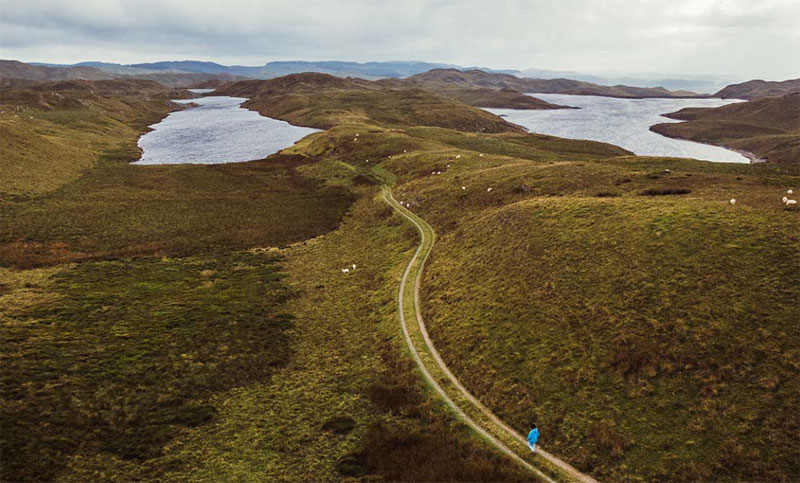 More in this category: « Return to the Swiss Via Alpina
back to top

How to get ski- fit and avoid injury, tips from Olympic skier Rowan Cheshire

MyOutdoors @MyOutdoors
RT @ImagesBeck: #guessthefell 26.5.20 The last one wasn't easy, here is a less challenging one. Just name the fell. For a bonus, whats the…

MyOutdoors @MyOutdoors
@snoweider I find the best way is just cook an extra portion when cooking favourite meals. You can pick up a vacuum… https://t.co/V05o73xJ7G

MyOutdoors @MyOutdoors
@snoweider Learn how to dehydrate your own food. It saves a fortune on hill food from dried fruit to full camp meal… https://t.co/HWjhyk8exj