James Forrest a journalist and adventurer from Cockermouth, Cumbria,  has set a new record time for a self-supported continuous hike of Alfred Wainwright’s 214 Lake District peaks after completing the 525km (328 miles) peak-bagging feat in 14 days and 11 hours.

The inov-8 ambassador , and member of the MyOutdoors Review Team, ascended 36,000m - the equivalent height gain of four times Mount Everest – and wild camped for 14 consecutive nights during the adventure. Hiking alone with no support crew or pre-arranged help, James carried all his kit and camping equipment, and he occasionally re-supplied along the route with food and gas that he had earlier stashed in secret locations along the route. 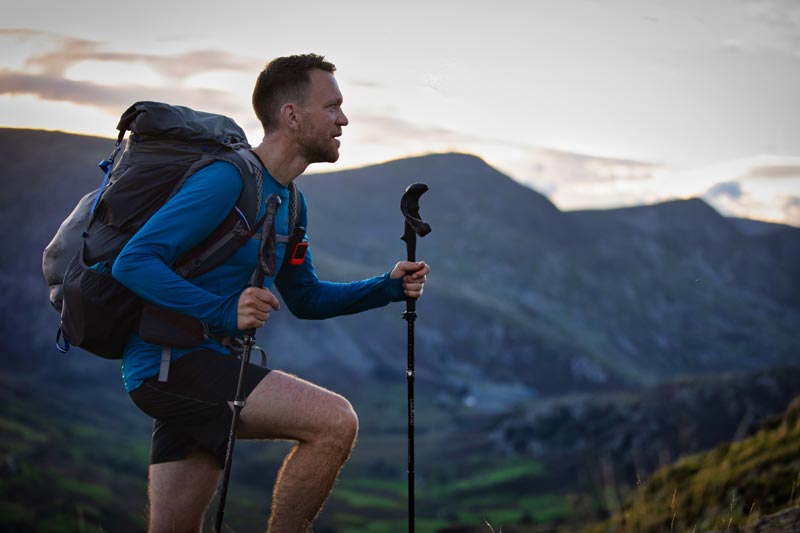 The journalist and author hiked an average of 13 hours a day, battling all manner of brutal weather conditions. He wild camped amid the remote fells, and also slept overnight in a cave, a barn and a church. It is the fastest known self-supported completion, beating what is believed to be the previous record of 25 days, set by Jack Roberts in 2017.

James – a bored office worker turned adventurer who has set a number of mountain-bagging hike records across the UK and Ireland – said: “I am ecstatic with the time I’ve set and so relieved to have finished. “The atrocious weather transformed the journey into a rather gruelling and traumatic experience – I’ve never felt so utterly miserable and unhappy on a mountain before. I thought the torrential rain and strong winds would never stop.

“But I’m so happy that I found the strength and resilience to keep going and make it to the finish line – it was really emotional arriving into Keswick, cheered on by friends and family. That moment will stay with me forever.

“It has been the challenge of a lifetime. I love the Lake District and – if I can somehow forget the thrashings I took from the weather gods – I hope the enduring memories of my expedition will be the times when the sun did shine and I relished the peace, beauty and escapism of Lakeland. The Lake District is a special place and we should all respect and look after it.” 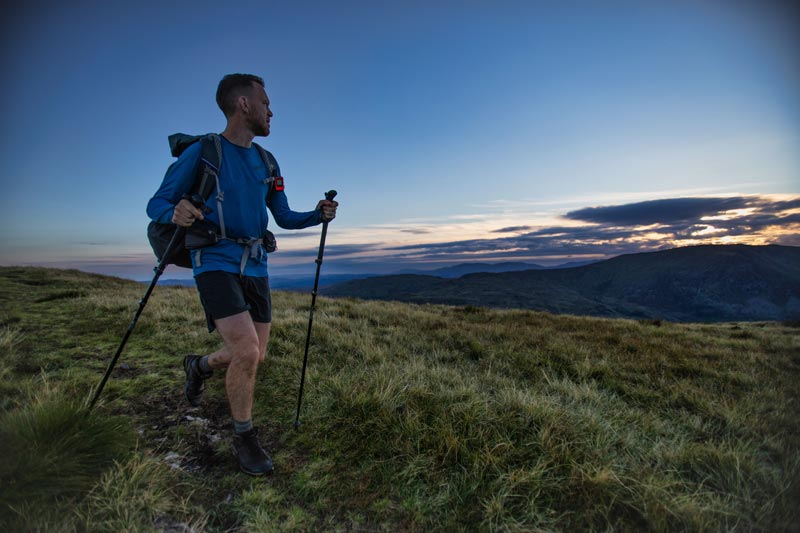 James adhered to leave no trace principles during his trip, camping responsibly by carrying out all litter, never lighting fires, and pitching late and leaving early. The fastest supported completion – and overall record – is held by inov-8 ultra runner Paul Tierney who, in June 2019, did it in a phenomenal 6 days, 6 hours and 5 minutes, beating Steve Birkinshaw’s previous best by almost 7 hours. As you would expect given the nature of their attempts, both runners were supported by pacers and a roadside support team.

James added: “I have a newfound respect for the ultra-runners who have run the Wainwrights in under a week – I have no idea how they got around so quickly. “My approach was very different, however. Hiking alone and without a support crew added an extra layer of difficulty to my expedition, particularly the discomfort of camping in depressingly damp conditions after a long day of hiking.

“In some ways I loved the solitude and tranquillity – and I relished test of being entirely self-reliant. But dealing with the rather crushing mental lows by myself was incredibly difficult. There were a few times when I was in tears, ready to quit and throw in the towel, but I managed to pull through.

“I hope my journey has inspired some people to seek out the mountains and adventures in the great outdoors – they can have a massively beneficial impact on your mental health. Just make sure you pick a good weather window!” 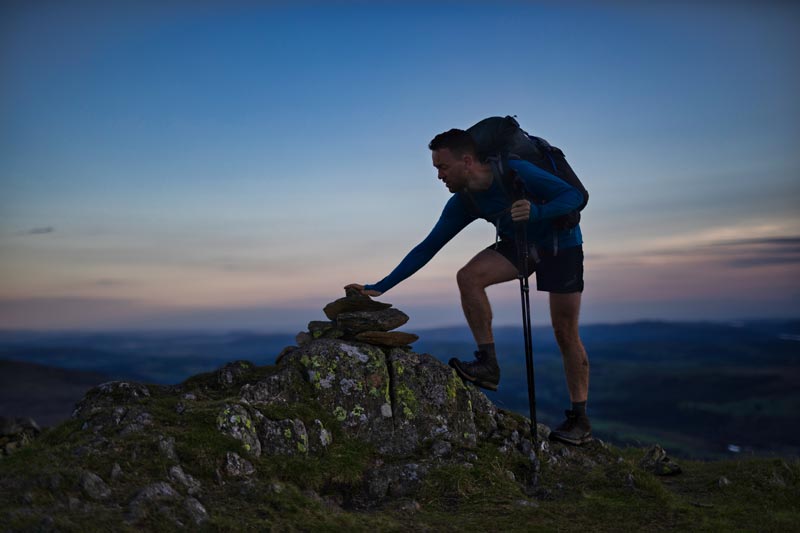 James followed the route Steve Birkinshaw had meticulously planned in 2014, and which Paul also used. Starting and finishing in Keswick, it wriggles a way over the 214 summits famously featured in Alfred Wainwright’s iconic seven-volume pictorial guide to the Lakeland fells.

James added: “Steve’s route is incredibly clever and efficient – and I thank him for sharing it with me. He even came to see me on Blencathra and that was a lovely moment that really gave me a boost when I needed it.”

Lee Procter, inov-8 Global Communications & Ambassadors Manager, said: “It was a case of Hike, Forrest, Hike! What James achieved is amazing. He got to grips with some of England’s toughest hiking terrain, moving fast over it every day for almost 3 weeks. He has banked up many stories from this epic solo adventure and we can’t wait to hear them all.” 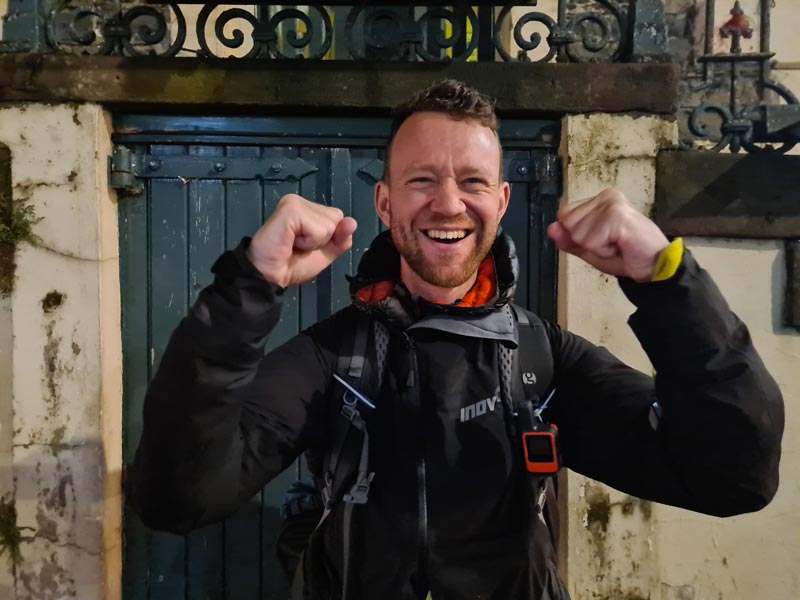 James Forrest previously completed  a triple-crown of peak-bagging expeditions covering 1,001 peaks across the UK and Ireland. In 2017 he climbed all 446 mountains over 2,000ft in England and Wales – the so-called ‘Nuttalls’ – in just six months, the fastest ever time. He repeated the feat in 2018, bagging all 273 600m mountains in Ireland and Northern Ireland, known as the ‘Vandeleur-Lynams’, in just eight weeks, another record. And he finally completed his 1,001-mountain challenge by bagging all 282 ‘Munros’, mountains over 3000ft in Scotland, in 2019.

James is the author of Mountain Man: 446 Mountains. Six Months. One record-breaking adventure, published by Bloomsbury.