‘I’m coming up… so you better get this party started….’ Combining paragliding, sea kayaking, high ropes and a breathtaking cable car and train ride to the Eiger as part of Jessie Leong's unexpected journey through Interlaken, in the Bernese Oberland of Switzerland

Shirley Bassey’s crooning words in the style of a majestic Bond theme tune seemed perfectly apt way of setting the mood as part of our trip into the iconic town of Interlaken, the setting of our third and final stage of the adventure throwing together a mix of high-octane activities that would culminate in a journey up the Jungfraujoch to the highest station above Europe. Framed by two huge mirror like bodies of water, Brienzersee and Thunersee, Interlaken greeted us with beautiful European style architecture and hills that rose steeply around the town and a more multicultural feel compared to the isolation of the past mountain villages. The striking mountains that crown the town’s horizon – the Eiger, the Monch and the Jungfrau in neighbouring Grindelwald - were tucked just behind the land mass of the town, and swathes of colourful silk circle overhead, as paragliders swooped above the town’s turrets. 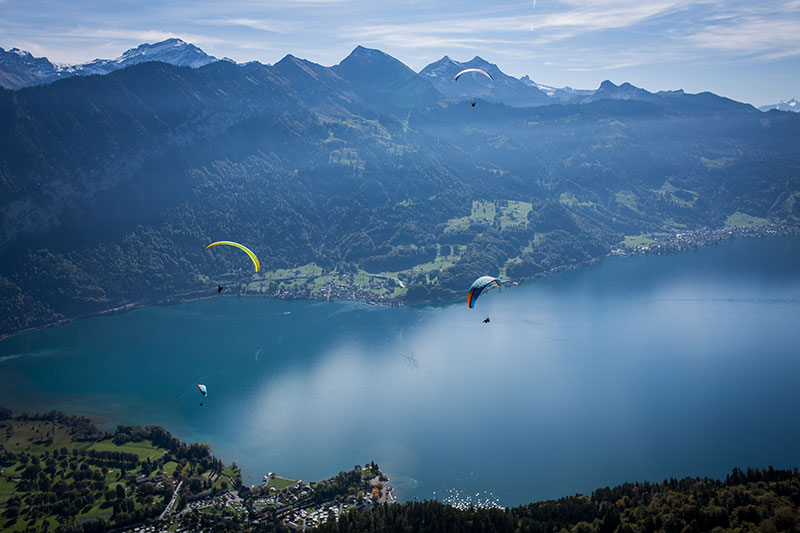 View of the Eiger, Monch and Jungfraujoch – from a paraglider

Technically it was a Sunday night as we arrived into our final destination of our ATTA trip – and after a whirlwind action packed day crossing between Valais and Bern  which had included a geothermal spa experience  in Leukerbad, and crossing a mountain pass into Kandersteg on a full suspension bike.  With a final set of train connections to make there  hadn’t been much time to rest in our rooms in Interlaken.  We were then whisked off to the start of the Adventure Travel Trade Association Swiss Travel Mart – a huge conference bringing together buyers and tourism partners from across Switzerland. As Interlaken has a bustling, cosmopolitan feel to it, it felt more apt for the first time to ‘properly dress up’ and the mild autumn temperatures meant it was even possible for sandals to make an appearance! 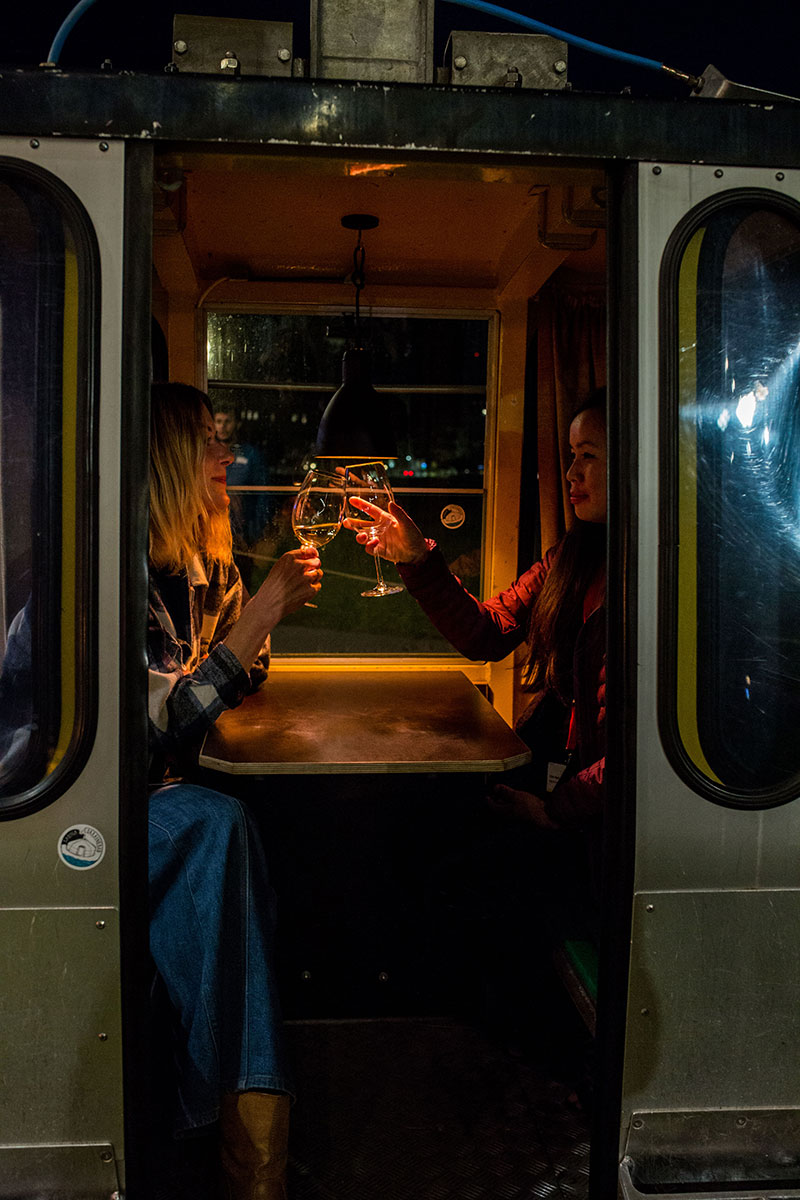 Drinking in an old cable car at the ATTA

An opening event at the STM conference centre opened with an exciting, live theatre performance of William Tell, a fable story known amongst Swiss school children about a Robin Hood style figure standing up to the authorities – and being challenged to shoot an apple placed on his own son’s head to secure his freedom. The live performance included a ‘real’ set – including traditional Swiss dry-stone buildings with mushroom shaped stones perched underneath grain stores, a herd of cows, guards on real horses and even two stubborn donkeys making a reluctant appearance.  Whilst the performance was entirely in Swiss German, the cultural entertainment was still appreciated and washed down with a little aperol and kale and bananas chip snacks.

The rest of the STM included a mix of networking and being hosted by important senior figures from Swiss Air, SBB and head of Swiss Tourism – followed by an evening of conversation in a room with the greatest number of Swiss flags I’d ever seen.  No such thing as an early night at these events– it wouldn't be long until we were to roll into Day 8 and commence the final action-packed day of adventure at the Swiss Travel Mart. 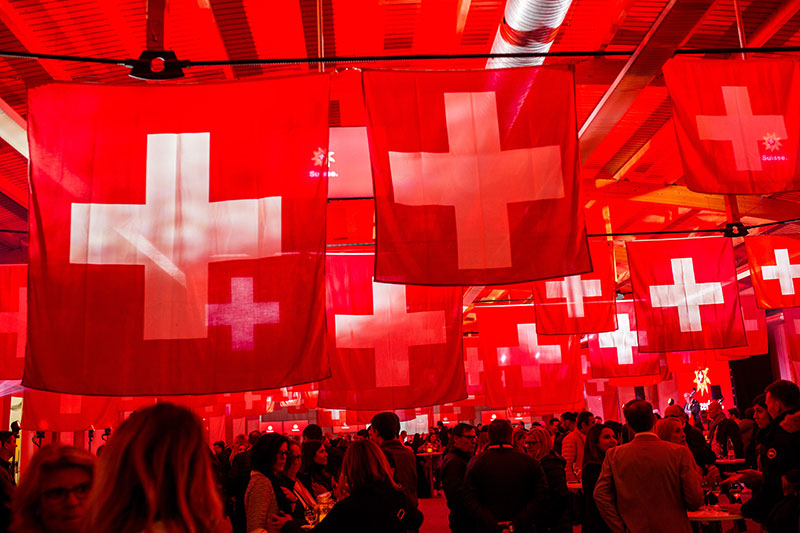 Kayaking Lake Brienz is one of the best ways to see Interlaken from a different perspective. Fed by glacier rivers, and over 14km and 2.8km wide, the lake owes its turquoise colour to the sediments that the glacier river brings to the lake combined with the lake’s depth and the amount of sunlight. After a short walk from our hotel to Interlaken Ost, we boarded the short bus ride to the water’s edge of Brienzersee, to High Tide, a kayak company which runs sessions all year round. Our guide, Mariano fitted us with dry suits, carefully explaining step by step how they work with rubber seals to ensure we’ll be kept super comfortable despite the frosty temperatures in the valley - and a glacial water fed lake! 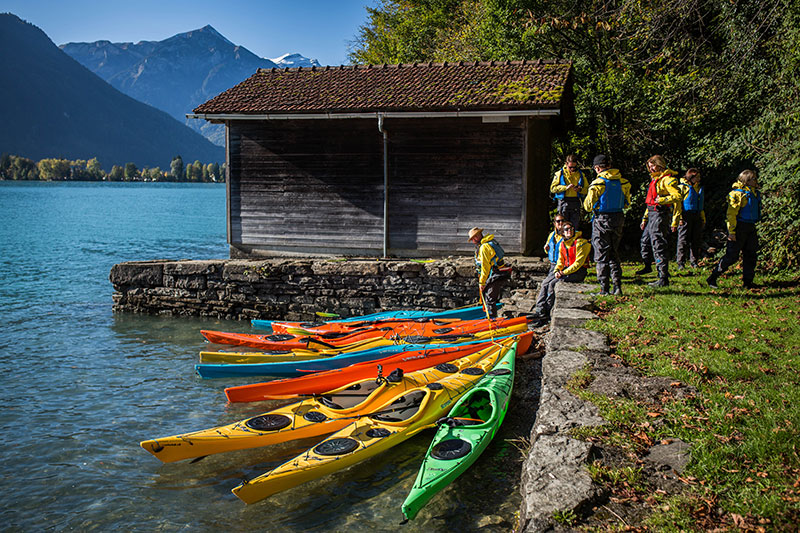 Suited (and booted), we stand in our comfortable dry suits, the equipment modern and clean, and we were handed some neoprene kayak holders that keep our hands warm in case we need it.

Lastly, a life jacket is given to us along with a paddle that range from mustard yellow to a plump pear green. It’s a vision of colour and excitement, as we walk the short walk to the water’s edge where a rainbow array of kayaks awaits us – and with the sun gently rising above the hills, the colours started to shift again. The water changes from a deep stone blue to a bright turquoise body of water, appealing as we glide smoothly into the water. There’s little wind and buffeting so even those who’ve never kayaked before finding it effortless. 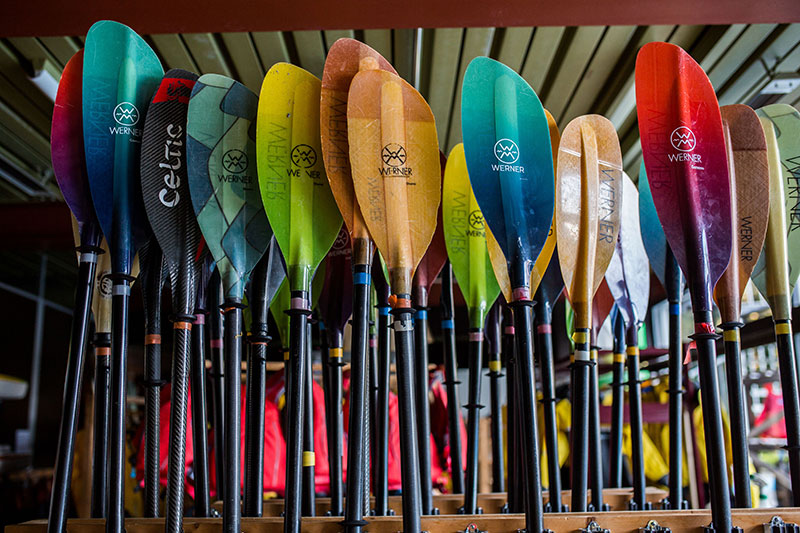 Having kayaked on slightly choppier surfaces in the Lake District to the fjords of Norway, the kayaking on Lake Briensee felt elegant and easy on my aching shoulders. We’ were told by our guides to be mindful of the traffic that also shares the water – including several boat tours – but the mood was one of calmness and serenity, until one of our members accidentally found herself in the water due to a small nudge by one of the other kayaks. After a slight squeal on discovering the water’s glacial temperatures, the instructors encouraged her back into the kayak, and wasn't long before we moored ashore in a small bay to visit a castle that overlooks the lake. The lake is fed by several significant rivers- the Aare at its eastern end, the Giessbach at its southern shore from steep, forested, and rocky hills of the high Faulhorn and Schwarzhoren more than 2,000 metres (6,600 ft) above the lake, and by the Lütschine, flowing from the valleys of Grindelwald and Lauterbrunnen, at its south-western corner. 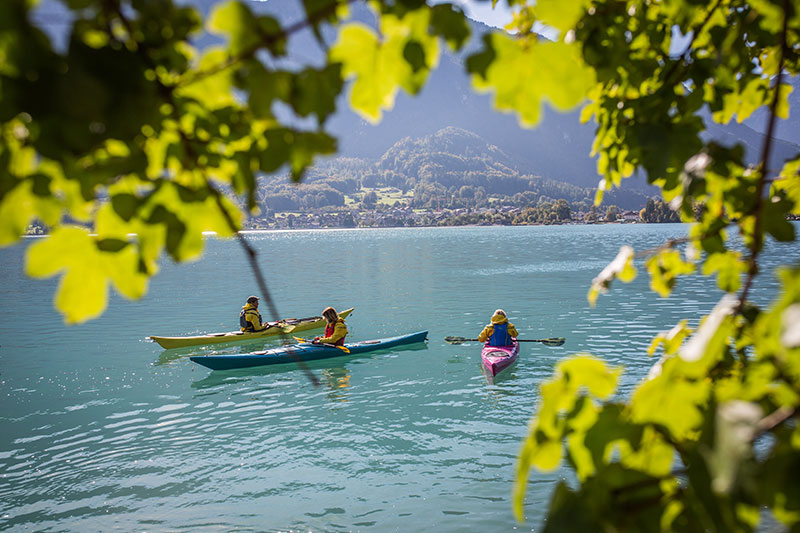 We finished the tour with a short paddle back to the High Tide Kayak base, before a tasty lunch of warming pumpkin soup and tasty sandwich – still to come was the enthusiastically anticipated paragliding experience.

Paragliding has always appealed to me, and with my growing interest in alpinism, it’s a no brainer that it makes the descents much speedier! During a Women Rise Up meet held in Zermatt, the two other experienced female climbers expressed their passion as paragliders and spoke of how effortless it felt. I was super excited to see if I could find enjoyment in this new form of flight – and what it would feel like to paraglide over Interlaken! 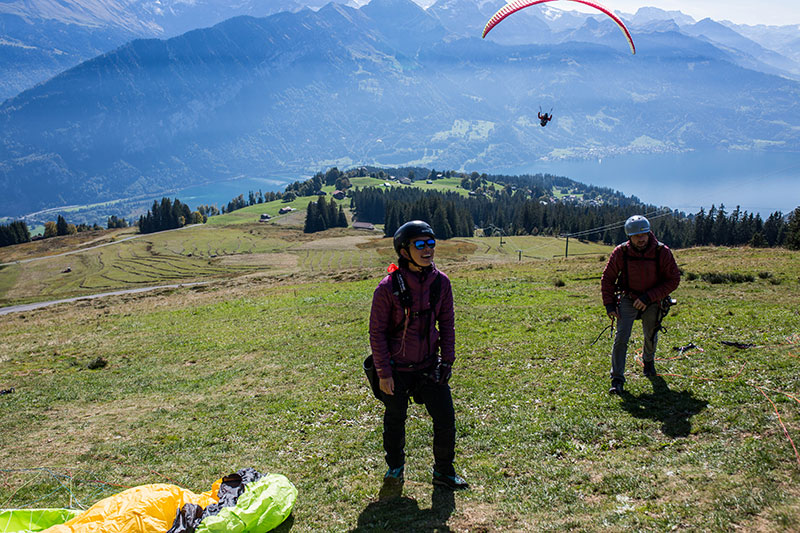 With my guide, Bruno, a freelance instructor working for Twin Paragliding Interlaken, we travelled up in the group minibus up the hill above Beatenberg where he laid out our paraglider on the grassy slope. In the eyes of the Swiss paragliding isn’t deemed an ‘extreme sport’ but rather a form of flight, and as Bruno calmly explained, it would be a short jog off the hillside before sitting comfortably in the seat. As a mountaineer, I had the cold weather kit with me, and I was appreciative of the fact I had worn softshell trousers with merino leggings and my B1 boots, giving me warmth and comfort during the flight. I also had mountain bike gloves on which helped with dexterity, and allowed me to help with taking photographs and even sampling controlling the paraglider in a 360 degree turn! 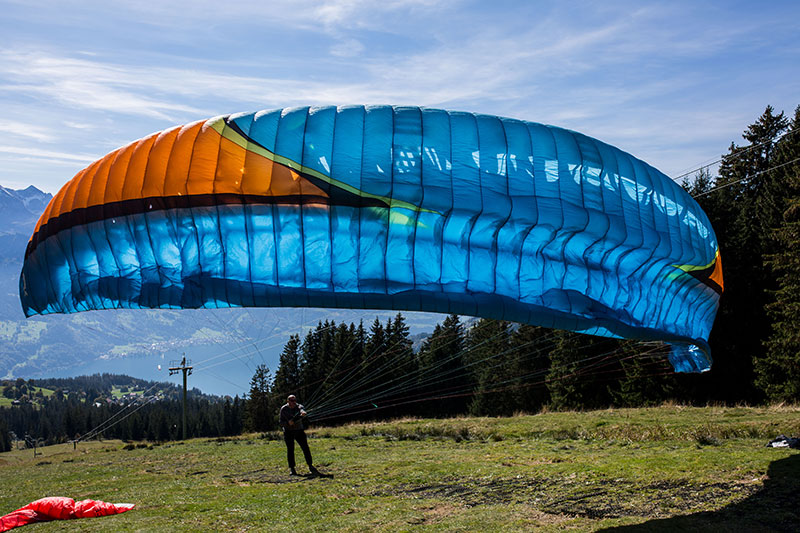 Descending into Interlaken, the views are of Harder Kulm, Jungfraujoch and the town’'s sprawling buildings, I felt a real sense of calm and mindfulness during the flight. We were lucky – managing to find several thermals above the treetops, to circle up into the sky and  look down on visitors watching us, agog. It was a sense of bliss, rather than adrenaline, as I took in the lakes, the mountains, the skyline. A natural way to descend the hills, losing around 1000m of height gain – perfect. 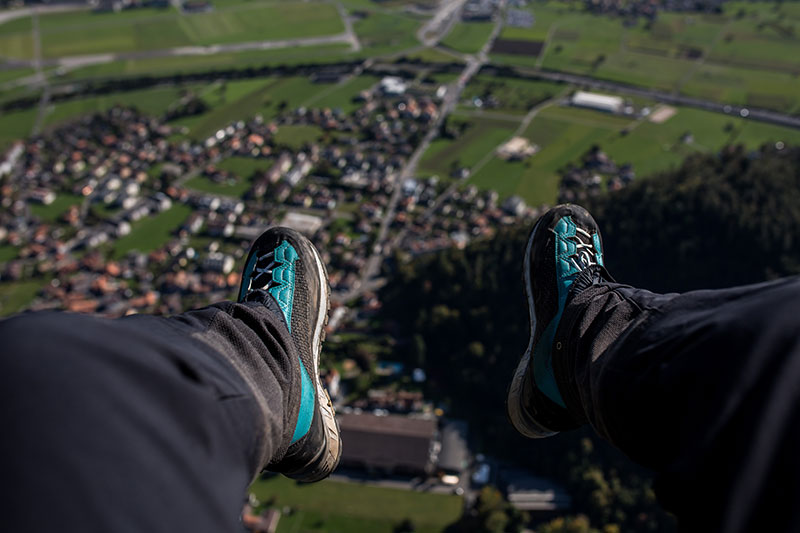 A high ropes experience after our endorphin rush flight proved to be a slight source of frustration due to my clumsy adult coordination, especially as numerous groups of kids managed to operate the fiddly safety karabiners that required sliding onto a web of intricate cableways. No wonder Switzerland was renowned for world class engineering – as a child no bigger than my waist height zoomed past me on a zipline and grabbed cables and wobbly, suspended wooden logs. We finished the day, slightly exhausted but happy, thanking our hosts at Interlaken Tourism before we had a final night of celebrations part of the ATTA. Much to the envy of some of the members in our group, who had sampled many meetings over the course of the day, the adventure packed day had been just a delight from start to finish and had shown how close everything was in relation to the town’s well-connected infrastructure. 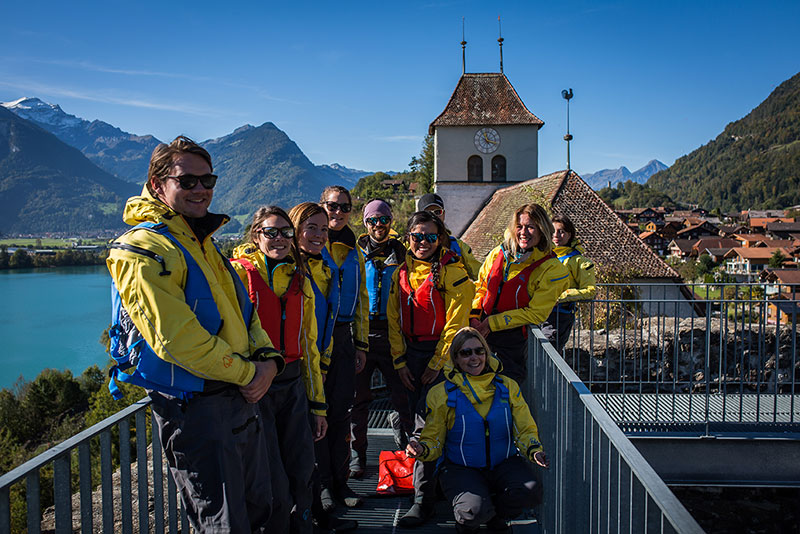 Finally, my trip in Switzerland finished on a high – 3463m above sea level to be exact, as I used my swiss travel pass to board the train from Interlaken Ost, to Grindelwald, then via the scenic route on the regional train – before realising the Eiger Express was the new cable car from the newly opened Grindelwald Terminal, not the train station! A final glossy train from Eigerstation took us to the Jungfraujoch station, some two hours later. Unfortunately, due to the low cloud, a lot of the view was obscured by thick cloud – but it was still impressive to note the outside air temperature ( -9 degrees) and see two inquisitive Alpine choughs, bristling in the cold alpine winds. The glacial bergschrunds could be observed from the viewing platforms, but it was a firm incentive to myself to return to the area – for exciting alpine adventures next time. 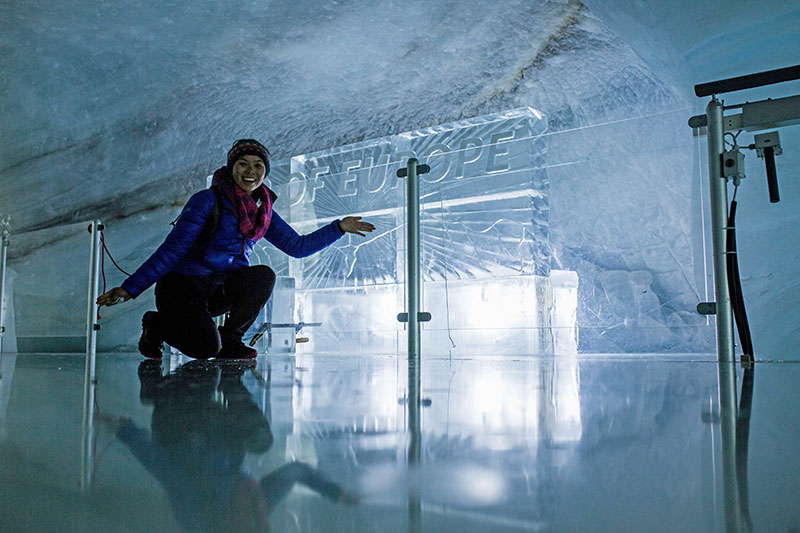 Interlaken has been the perfect destination to sample the perfect combination of adventurous activities in Switzerland – and a destination that’s firmly in my mind for future trips to come. Whether it’s mountaineering or even paragliding flights I’ll be returning,;  it's shown the versatilityand range of adventure and providers available and  how it makes an ideal base to visit a wider area. With my heart firmly in the mountains, I can’t wait to return to Switzerland for a summer of adventures starting with a return to Interlaken! 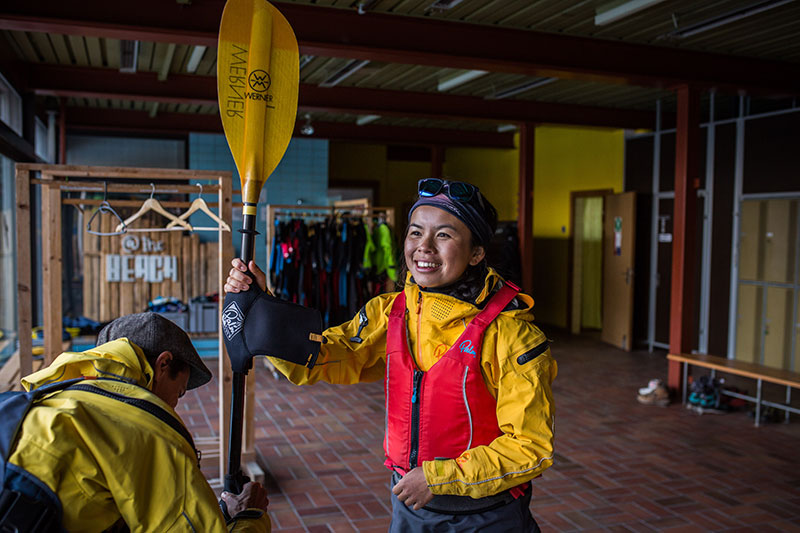 Part 2 - Switzerland - the continuing unexpected journeys of an adventure journalist

More in this category: « Switzerland - the continuing unexpected journeys of an adventure journalist.
back to top