Ahead of Le Tour - A Morzine Road Ride

Morzine in the Portes de Soleil is well known as an adventure hot spot. Once the white stuff melts away come spring, the baggy shorted, hairy legged arrive en masse to take advantage of some of the best mountain biking in the world regardless of if it's Downhill, XC, Enduro or simply high mountain trails to drink in the views. What about the men in lycra you ask? Well it's Alps and of course there are steep and high cols, fast rolling roads and all the ingredients for cycling nirvana which I just couldn't turn down the chance to discover for myself.

On Saturday July 23rd. stage 20 of this years Tour de France runs from Megeve to Morzine-Avoriaz via the fearsome Col de Joux Plane, last used in 2006 when Floyd Landis "won" the stage which we won't dwell on, and this will be the last chance for anybody hopeful of succeeding Chris Froome as champion. Unfortunately, the Joux Plane was under repair whilst I was there and there was no practical way to include it in a circuit from Morzine but there are plenty of other options to choose from including the Col de La Joux Verte. 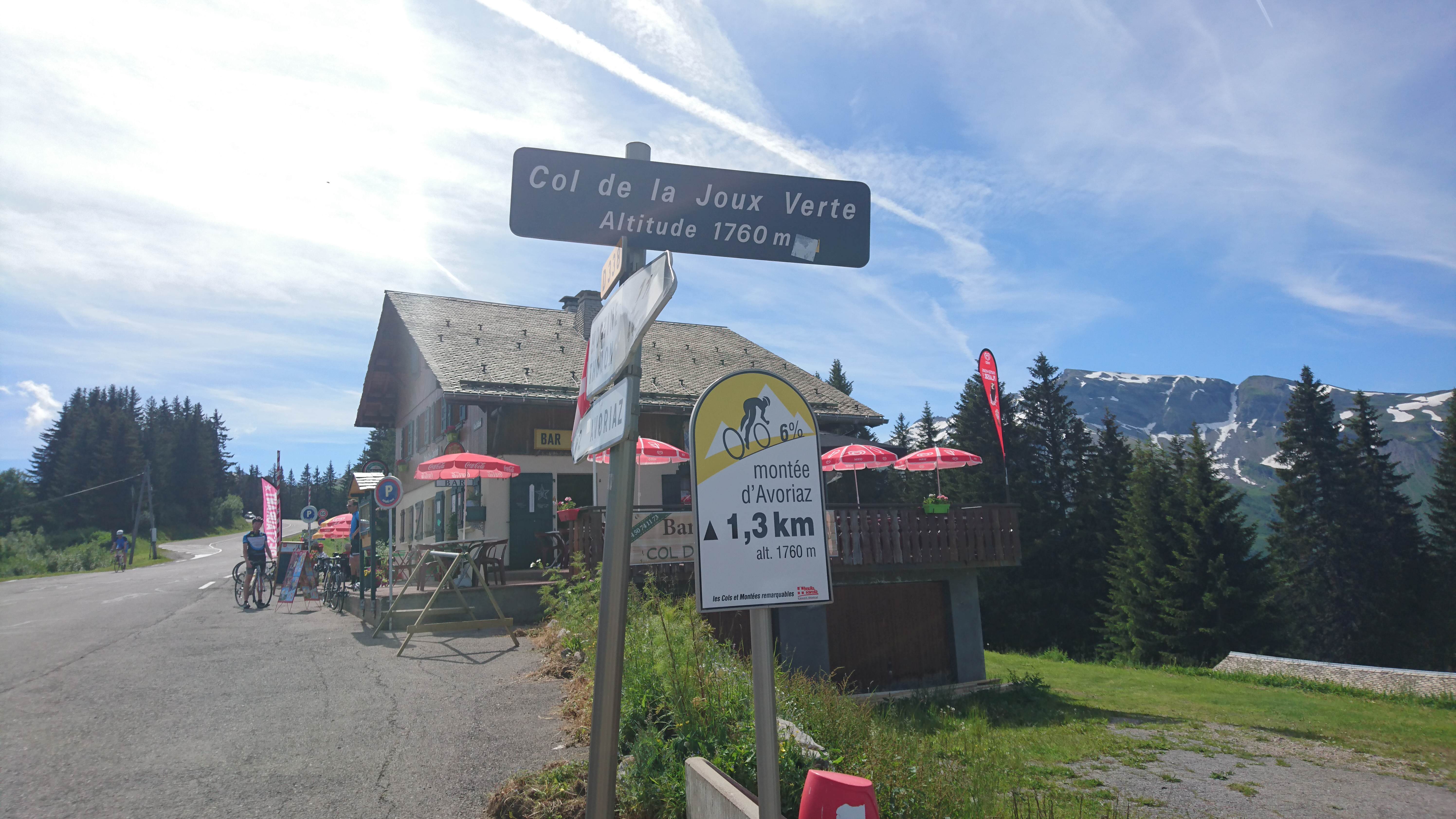 Last used in the Tour in 1981 when Frenchman Robert Alban was first to the top, the Col de la Joux Verte is perhaps a lesser known climb than some other Alpine climbs but according to Strava it carries a Hors Catergorie rating. 14.4km in length with an ascent of 868 metres at an average of 6% this is real climbing. Whilst not as hard as the Joux Plane or it's illustrious near neighbour, the Avoriaz, the challenge is still enough to produce butterflies in the stomach of a rider more used to the Brecon Beacons.

Joseph from local guide company RideAbility was to be my riding partner for the day and as we discussed plans over an espresso it was obvious that Tour fever was starting to build up. The following Sunday the Etape de Tour (a sportive run in conjunction with the Tour) was finishing in the square we were in and preparations were well under way. Being in the mountains the favoured decorations and bunting was Polka Dots of course and even the road crossings were sporting the polka livery of King of the Mountain. 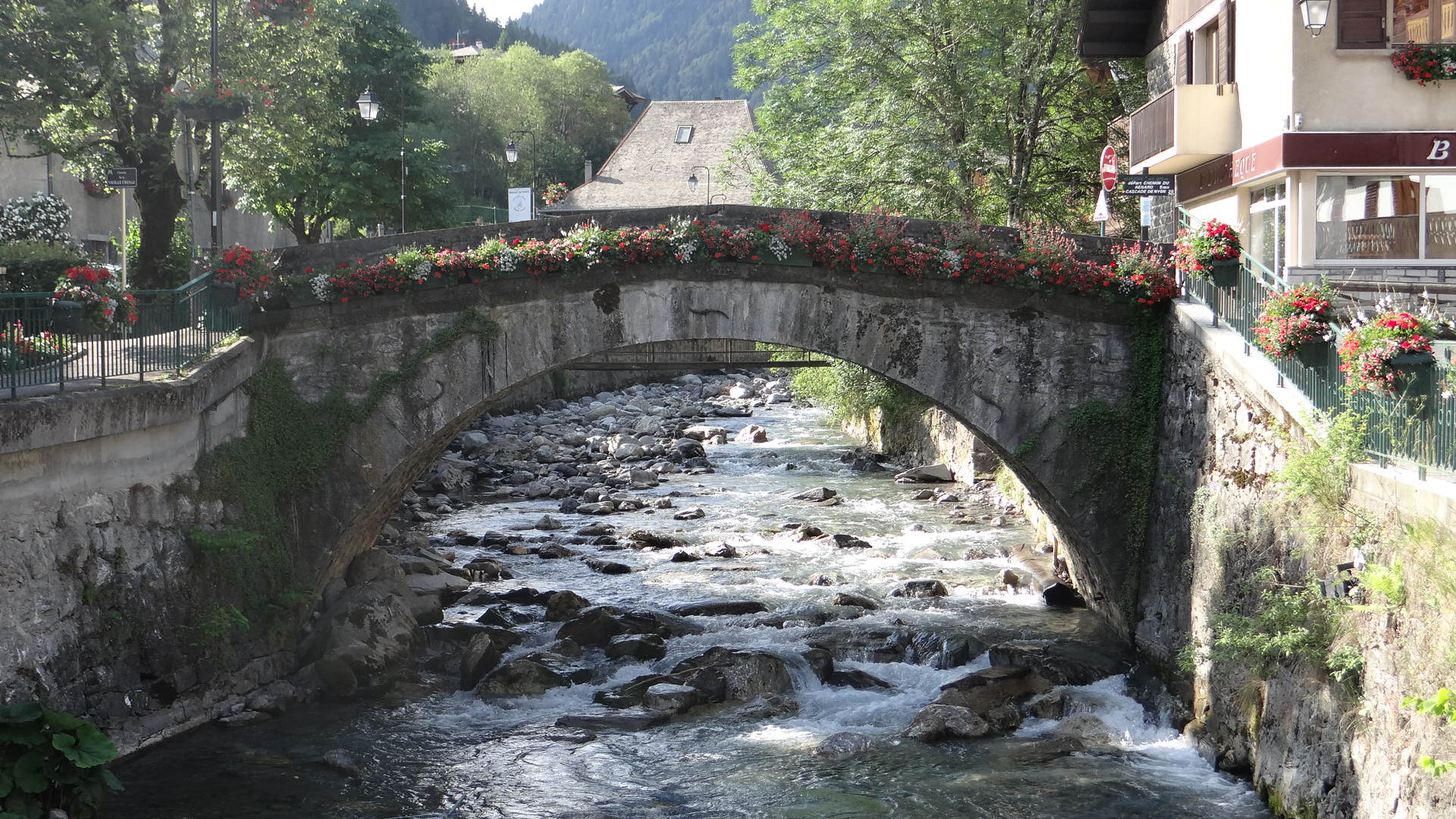 15mins or so later we arrived at the foot of the climb in Montriond and I clicked into the climbing gears. Grateful for the 34 tooth cassette I fitted, the climb soon eased into a steady spin. Passing through tunnels and along tree lined roads before long the waters of Lac de Montriond emerged on our right. A popular watersports spot I can quite honestly say that this may be one of the most beautiful spots I've been to. Jade green waters enclosed by steep mountainside it is perhaps the very essence of what the high mountains are about, but with no time to stop we rode on and to the crux of the climb. The 5 or so km to Les Lindarets also known as the goat village.

The climb ramps up to a maximum of 12.1% during this section and never really drops below 10%. A fit cyclist though will be in their element. This is what it's all about and as the trees give way to open mountainside the village and the goats appear. The goats are a local tourist attraction. For a few Euros you can buy feed and hand feed the goats. Of course the goats think everyone is feeding them and can become quite insistent and they don't kid around. I wondered in I had goat cover on my insurance. I also had a wry smile at the enterprise of the local farmer charging people to feed his livestock. Chapeau to the man. 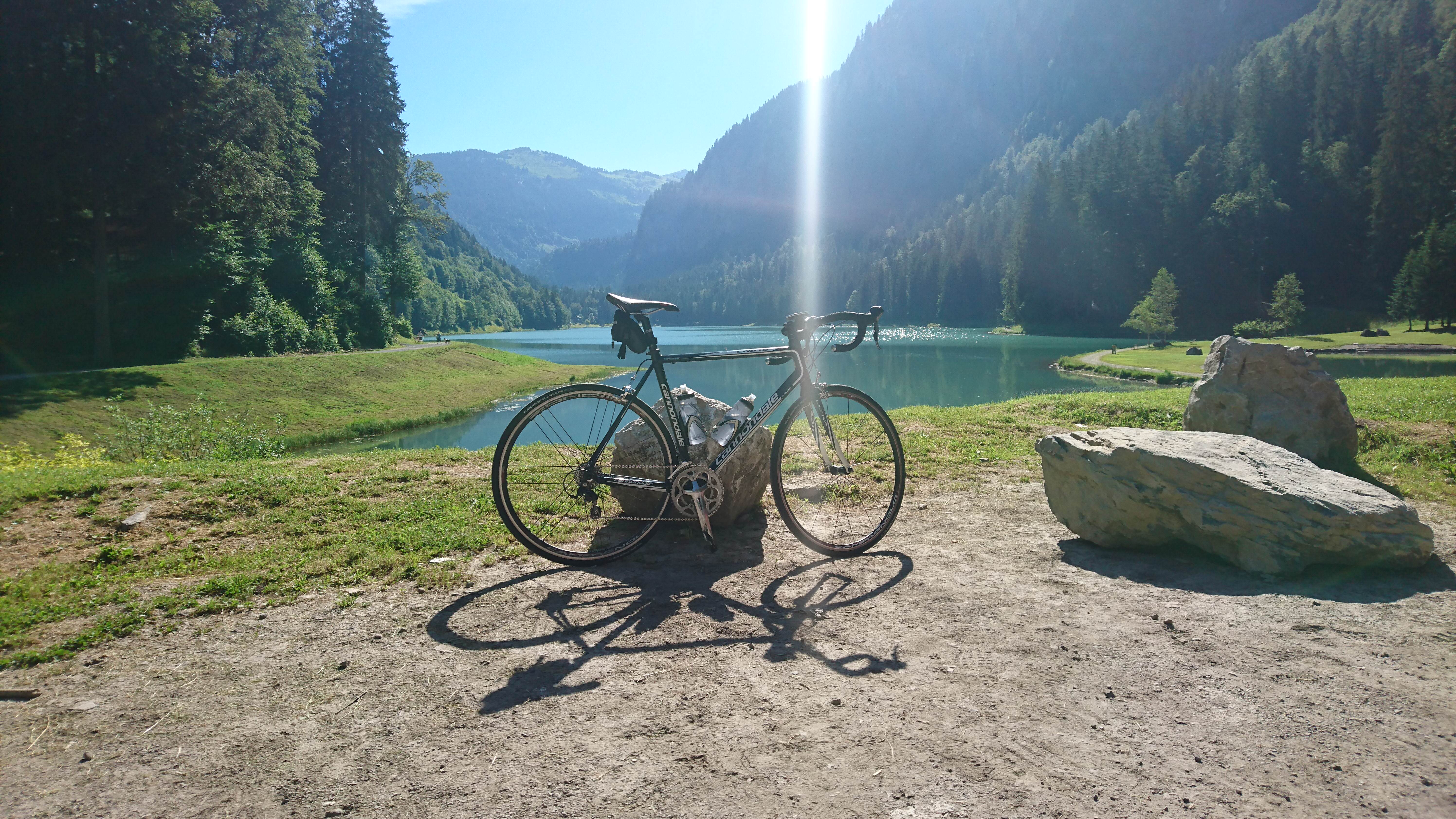 The day was starting to get hotter as the top of the Col de la Jous Verte came into view and Mountain bikers who'd taken the lazy way up on the lift came out from all angles. All I wanted to do was get to the top though. As the distance markers were ticked off the views continued to open up and although my legs were burning and my jersey was unzipped to the waist, I drank them in. It had ben a few years since I'd been to the Alps in summer and I'd forgotten just how dramatic it is and on a bike the pace is perfect to experience it first hand. Before I knew it the junction with the Avoriaz climb was reached and we'd done it. My legs let themselves known to me and I could barely unclip. One cold drink later though and we would be ready for the descent.

The Avoriaz is more commonly used in the Tour than the Joux Verte. Joseph told me the tail of an instructor who'd recently had a corporate group on a mountain bike trip. In the group was a guy who although fit was as technically proficient. Telling him that the Avoriaz was often used as a mountain top finish in the tour this client said "Yes I know I won it the last time" It was Andy Schlek who won the stage in 2010!

The descent was around 11km and averaging 7%. Joseph gave me some braking advice to cope with such a demanding challenge and we swept down through the hairpins on smooth roads. Well Joseph swept down the hairpins I was a lot more cautious practising the tips I'd been given and grateful I'd taken my own bike with the brakes on the right sides. My GPS tells me I hit 53.1mph on that descent. I've no idea where I was eyes on the road and certainly not on my stem. 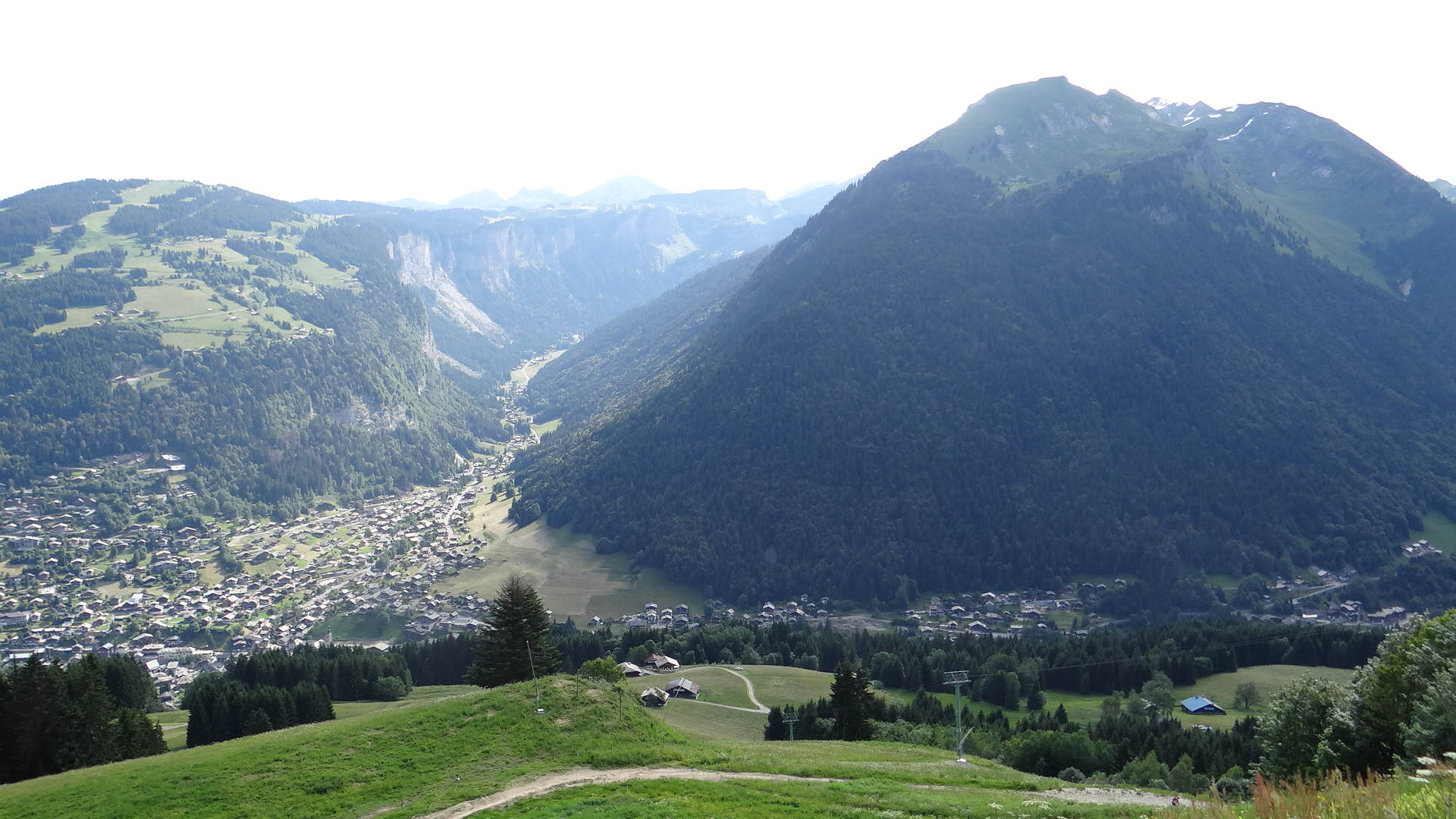 A short steep climb up to Lac de Mines d'Or followed and lunch where Joseph and I chatted about the area and Joseph is a Ski Instructor and usually a mountain biking instructor and it turned out that I was his first road client. I'd certainly recommend him. Friendly, approachable and spotter of wild mushrooms and strawberries. Top bloke.

After lunch over the Col Les Gets and around to do the quiet but steep Col de Encrenaz and finally the descent back to Morzine and finishing on the Tour route. I'd only had a little taste of what was to offer locally and as I bid farewell to Joseph I was happy. 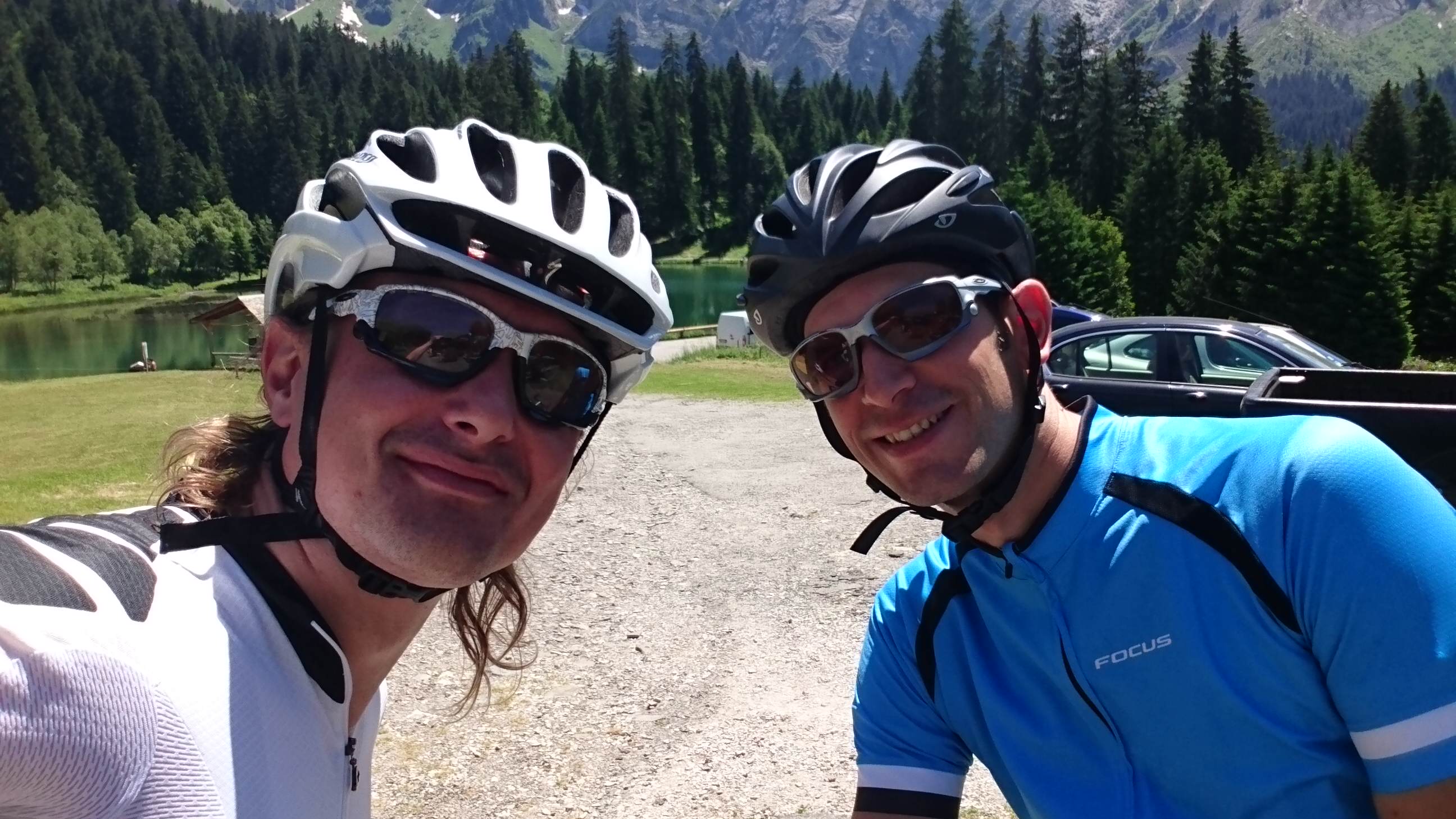 As an obsessive bike nut going to the Alps is a rite of passage. I honestly believe that you can't call yourself a true Mamil until you've at least attempted on the climbs of the Tour de France. The next day I indeed attempted the Avoriaz but with heavy legs from the day before and heavy stomach from the Biere Grand I'd had with lunch just before I got no further than 7 km sadly but even this just enabled to explore more of the town on my bike a joy in itself and to catch the gondolas to Plenary and Super Morzine to watch the gravity fans do their stuff. 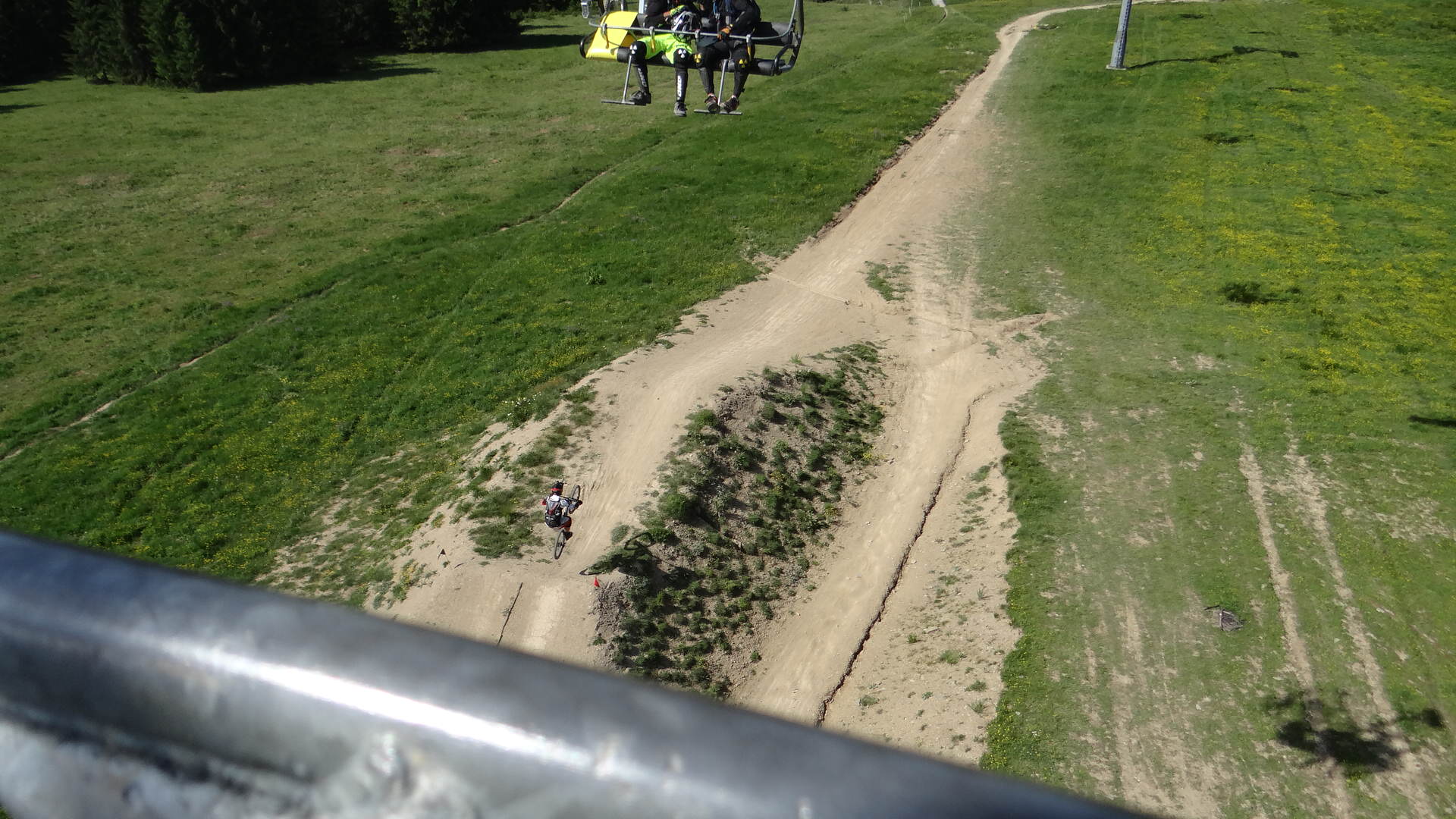 On 23rd July the Tour de France will arrive in Morzine. If you can't get there then watch it on TV and see for yourself what I'm raving about. You may just end up booking to go there next year.

Thanks to Inghams Holidays for arranging the trip and Lydia and Rachel in the office for patience with my endless questions and Elliot in Morzine for looking after me and being on hand.

Thanks to the Hotel Le Petty Dru for a comfortable stay and letting me build my bike on the balcony and the Hotel Les Champs Fleuris  for a gastronomic shock and delectable food.

Also thanks to Bruno from the Morzine Tourist Board for arranging Joseph and RideAbility to guide me through the hills.

Finally thanks to B and W International for the Bike Box which let me take my own bike to Morzine. She deserved a holiday.

Inghams offers 7 nights at the 4* Hotel Le Petit Dru from £819 per person, including return flights and transfers. For more information or to book visit www.inghams.co.uk/lakes-mountains-holidays or call 01483 791 116.

More in this category: « Brit Rock Film Tour launches to packed house at Rheged Prudential Ride London-Surrey 100 »
back to top

MyOutdoors @MyOutdoors
A level uproar? Not a problem, throw another dead cat on the table by putting France on the quarantine list.

MyOutdoors @MyOutdoors
RT @harriethadfield: Breaking: Relief for British expats as #Switzerland has not been added to UK quarantine list, despite rumours earlier…

MyOutdoors @MyOutdoors
There's nothing like looking through the eyes of someone seeing it for the first time and with your photos and reac… https://t.co/0EglS9nYnF