The It’s Great Out There Coalition has confirmed that the next #itsgreatoutthere grant will be awarded to a collaboration between Finnish children’s outdoor brand Reima and an inner city primary school in London.

The grant will help the two partners run a project designed to create a culture of being more active among young people and those with whom they interact.

Rosendale Primary School is in the borough of Lambeth, an area with a diverse population where 36% of children live in poverty. Rosendale’s ethos is that physically active children are not only healthier but also do better academically, and are also far more likely to be active as adults. Working with Reima and its ReimaGO sensors, the school’s #itsgreatoutthere initiative will set out to provide empirical evidence to back up its beliefs and use that to inspire children and adults to be more active in the outdoors, and in general.

The research project will compare the physical activity of a study class (with ReimaGO sensors) and a control class (without sensors). These roles will be reversed half way through the trial to ensure that there is no negative experimental bias. As well as the children, the input of parents and carers will also be gathered to complete the picture. 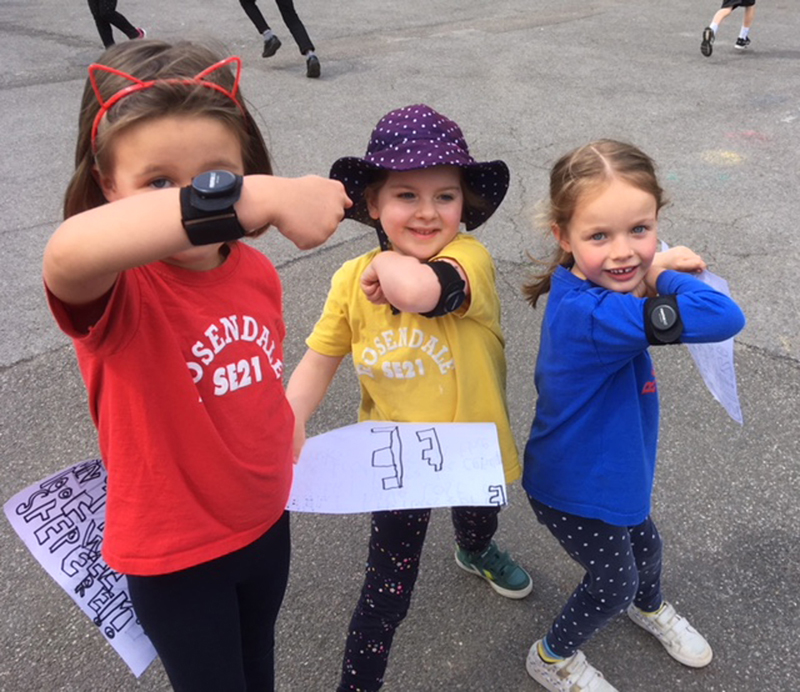 Rosendale Primary School is part of the Research Schools Network, a collaboration between the Education Endowment Foundation (EEF) and the Institute for Effective Education (IEE), and set up to champion the use of evidence to improve teaching practice. Marc Rowland, a representative for EEF and IEE, is currently seconded to Rosendale, having already worked with over 300 schools to support them with their strategy to improve outcomes for disadvantaged pupils. Rowland has agreed to independently assess the project that is being supported by the #itsgreatoutthere grant and will produce a report on the results of monitoring the activity levels in children. This report will be added to qualitative data gathered by Reima during school visits and research and results gathered by Rosendale School, in order to produce marketing literature to encourage more schools across Europe to consider similar initiatives.

Doug Cranston, Health, PE and sport curriculum leader at Rosendale Primary School, comments: “Rosendale Primary School is very excited about the research study we will be undertaking over the course of the summer term, which the #itsgreatoutthere grant is enabling us to do. Public Health England recommends that children aged between five and 18 should spend 60 minutes each day on moderate to vigorous physical activity, but only 15 per cent of girls and 22 per cent of boys achieve this. Research with adults indicates that wearable technology can help individuals track their progress and adjust to meet targets.

“This study will focus on our six Year 1 and Year 2 classes, who will wear the ReimaGO for half of the study and no activity sensor for the other half. The children’s activity patterns will be analysed from the data uploaded and this will be compared and contrasted with the activity of their peers who are not wearing the sensors.”

Mikko Linnaluoma, program manager for ReimaGO, adds: “We are excited about the project and delighted to have secured the #itsgreatoutthere grant. ReimaGO inspires children to discover the joy of movement and enjoy outdoor fun. Through this project, we hope to see how ReimaGO helps these children to move more through collective activities and common goals within school groups.”

Andrew Denton, secretary general of the It’s Great Out There Coalition, comments: “This is a really important and valuable project, and it is very worthy of an #itsgreatoutthere grant. Not only will the collaboration between Rosendale Primary School and ReimaGO provide extremely valuable material that they can use at a local level to inspire young people to be more active, but it will also deliver very solid evidence that we can all use on a bigger stage. It is vital that everyone involved in our campaign can back up our claims about the positive impact of participation in outdoor activities, and the results of this project are sure to help as we continue to communicate with policy makers, other schools, and the wider public throughout Europe.”

Any non-profit organisation can apply for an #itsgreatoutthere grant of between €1,000 and €5,000. The grants will be awarded to initiatives that focus on grass roots projects, which have primarily been developed to take new participants into the outdoors. The It’s Great Out There Coalition encourages potential applicants to team up with partners from the outdoor industry such as brands, retailers and activity providers, especially those who are already members of the coalition. Grants can be awarded to support projects that reach citizens of all ages and from any background. However, one priority is to support ideas that will help young people access the outdoors for the first time, particularly those who are based in the inner cities or live in circumstances that mean that getting access to the hills and mountains is difficult.

Founded by the European Outdoor Group, the It’s Great Out There Coalition is an International Non Profit Association that has been initially funded by membership fees from many of Europe’s leading outdoor businesses. The coalition is leading the #itsgreatoutthere campaign to encourage more people to lead healthier lives by getting active in the outdoors. For more information about #itsgreatoutthere grants, visit www.itsgreatoutthere.com/grants.

More in this category: « Fat Lad at the Back launch into the MTB sector Nevis Range and Trek announce a partnership for 2018/19 »
back to top