Thousands of runners and spectators gathered in Kinlochleven over the weekend for Salomon Skyline Scotland® 2021.

Two days of mountain running saw athletes exploring the stunning scenery of the Scottish Highlands in a series of skyraces and trail runs. Many more people turned up to enjoy the atmosphere, free talks, live music and food and drink in the Skyline Scotland® Event Village in the centre of Kinlochleven, near the finish line for all of the races.

The skyrunning programme began on Saturday with the Salomon Ring of Steall Skyrace™. The route of 29k and 2,500m of ascent incorporated two lofty ridges within the Mamores (an east-west series of mountains), including the Devil’s Ridge, with Glen Nevis visible ahead, a yawning drop far below, and Ben Nevis towering beyond and above. 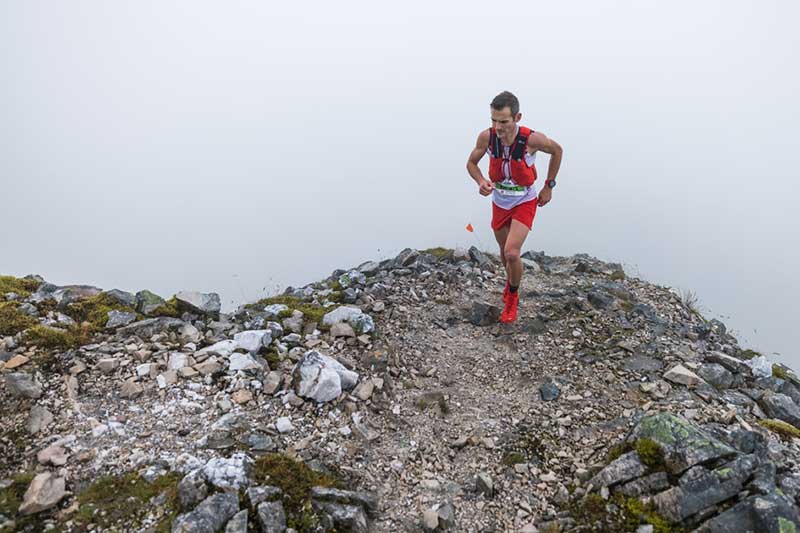 The event was won by Sebastian Batchelor, a clear 19 minutes ahead of the field. The 31-year-old Salomon athlete ran a very strong race, leading for almost the entire 29km, and crossed the finishing line in three hours 34 minutes and four seconds. Runner-up was Tom Adams, who finished in 3:53:04. The 39-year-old also secures a place in the Salomon Golden Trail Series Grand Final in the Azores, Portugal, next month, after competing in the UK series through which athletes can qualify. Third place in the Salomon Ring of Steall Skyrace Skyrace™ went to 30-year-old Harry Kingston in 03:58:50. The women’s race was won by Elsey (Eleanor) Davis, 32, who was also fifth overall in 4:16:39. She also earned a place in the Azores race. Less than a minute behind Elsey was Isobel Oakes, 35, from Northern Ireland, in 4:17:14, and third was Linda Duncan in 4:39:28. 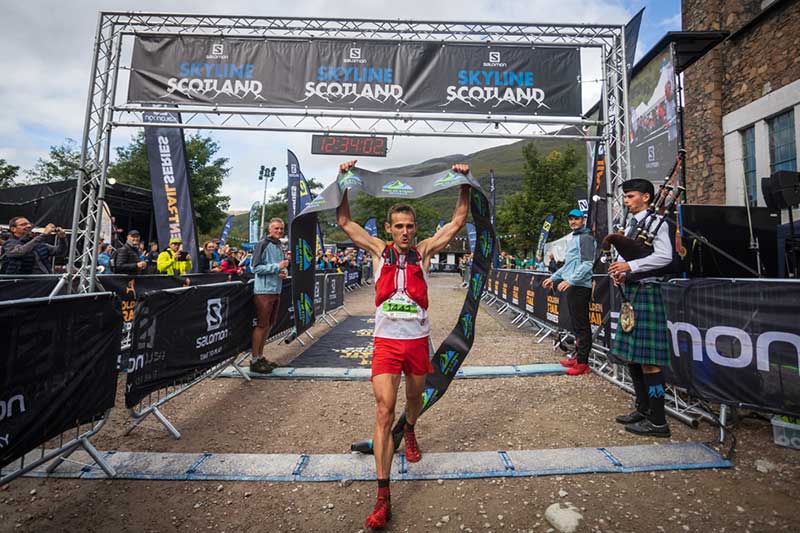 Sebastian Batchelor, who is originally from York and now lives in Ross and Cromarty, comments: “I am very happy to be here and to win. I just went out there and ran my own race. I actually enjoyed it. Tom and I pushed each other to start with and he caught up with me at one point but then from about half way, where there was a big climb, I pulled away and kept some distance. It’s really great to be back racing and to have won.”

Elsey Davis, who lives in Stockport and is originally from Cornwall, comments: “That was probably the hardest race I have ever done. I have bad leg cramps now. It was good to have Isobel’s company and we pushed each other. It was a bit cat and mouse and good fun. We also really enjoyed picking off the men one by one.

“I am very scared of heights and I was worried about the ridges. I wasn’t even sure I wanted to do the race. It was a technical course for me. But I managed it and I am pleased. I just tried not to look at what was below me. I am glad I faced my fears of the heights in this race. It was worth it for my trip next month to the Azores.” 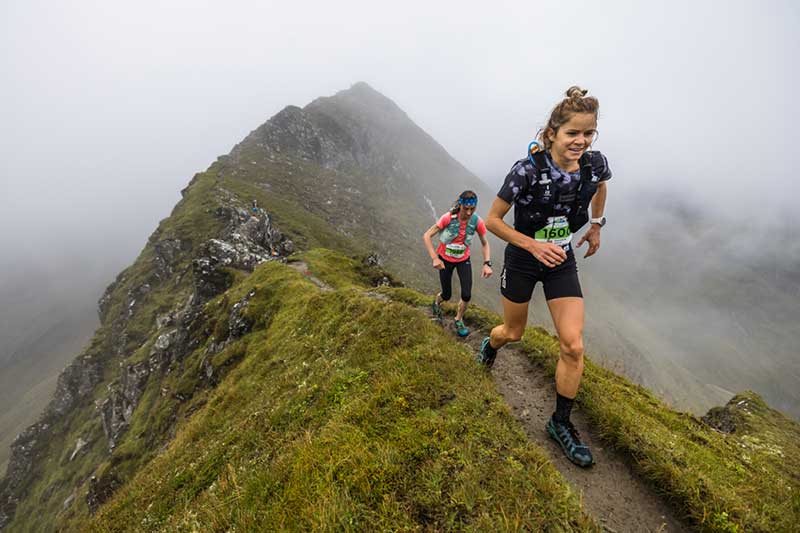 The Salomon Mamores VK followed the well-established ISF Vertical Kilometer® format, in which participants gain 1,000m of height in less than 5k. Runners were set off in intervals throughout the day, with the results announced later in the afternoon. Alastair Thomas (51:05) won the men’s race, with Jacek Cieluszecki (53:28) second and Tom Smith (53:52) third. The women’s race was won by Rachel Smith in 57:38, followed by Celia Waring (1:04:30) and Rachel Normand (1:08:50). were the respective men’s and women’s winners.

Also on the first day of Salomon Skyline Scotland® 2021 was the 5k Grey Mare’s Trail Race, with the route starting and finishing in the Event Village and initially sharing the same first section with the Mamores VK race. The winner was Fearghas Thomson in 27:47. Struan Gatherer was second in 31:26 and Alexander Louden third in 34:06. Winner of the women’s race (and fourth overall) was Lynn Gatherer in 36:22, followed by Ursula Heylings (38:13) and Eve Hilley (40:01).

During the prize giving ceremony in the Event Village on Saturday afternoon, donations collected from entrants in the Salomon Skyline Scotland® 2021 races were handed to two local mountain rescue teams, Glencoe MRT and Lochaber MRT. Each team received £3,000. 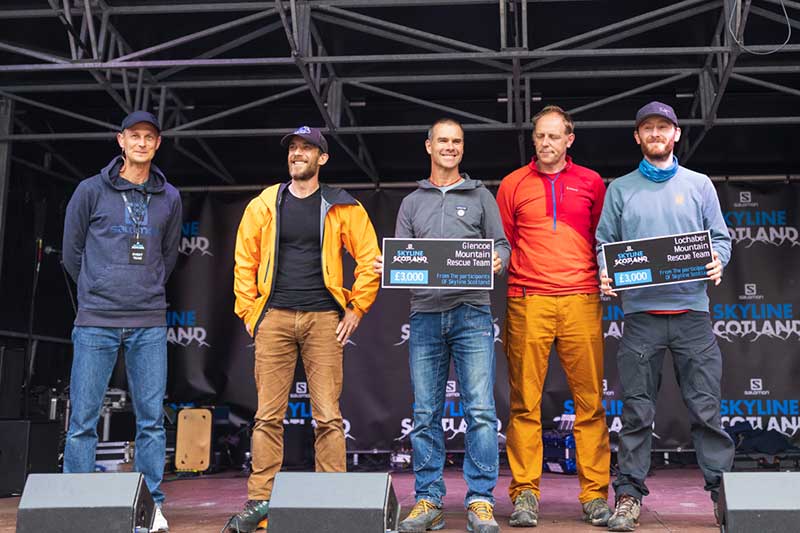 Andy Nelson of Glencoe MRT said: “The donation is significant for us because all rescue teams in the UK are staffed by volunteers and they rely on donations. A fraction of the finance to run our services comes from government and other organisations, such as the police. Donations from the public are vital to be able run our service. We are grateful for the money from runners in this event.”

Mike Smith of Lochaber MRT added: “Our team needs about £85,000 annually on average to run and we only receive £24,000 funding so every other penny of that comes from the public. We could not do what we do without that. This money is super kind. I hope that participants will remember, too, that all their local mountain rescue teams across the UK need donations like this to keep going.”

There was success for Scottish runners in the most demanding race of the weekend, the Salomon Glen Coe Skyline®, which started early on Sunday 19 September. In the finest tradition of the most prestigious skyrunning races, the race fused mountain running and alpinism in a pure test of speed, endurance and skill on an uncompromising, world-class course of 52k, with 4,750m of ascent. The event is only suitable for highly experienced competitors and all entrants were strictly vetted for experience.

The Salomon Glen Coe Skyline® was won by Edinburgh-based Andrew Fallas, while Georgia Tindley, from Kingussie, in the Highlands, won the women’s race. Revealing how tough the conditions were, with rain, wind, slippery rock and very muddy terrain, Andrew, 41, finished in 07:56:11, almost half an hour slower than the last time he raced this course in 2016. Georgia, 29, successfully defended her title from 2019 and finished in 08:43:10 and in sixth position overall. Her time in 2019 was 08:29:57. Second place in the men’s race was claimed by George Fisher (08:03:05), with Peter Davies not far behind in third (08:08:35). Rebecca Howard was second in the women’s race, more than two hours behind Georgia, in 10:49:38, and Catherine Magill was third in 11:06:49. 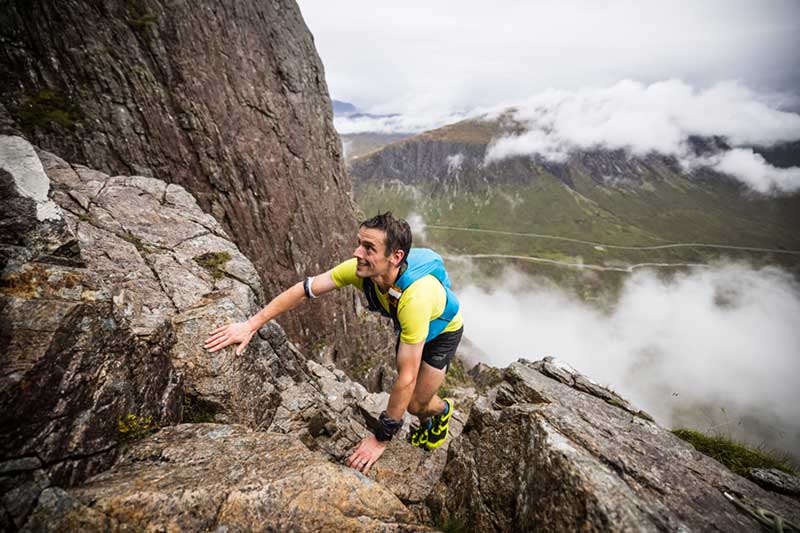 Andrew Fallas comments: “It is good to win, however, it was very difficult on the ridges and I had to take it slowly. It was slippery and a bit dicey. I tried to put in a lot of effort on the less technical sections. Later on in the race, on the Aonach Eagach ridge, I thought a couple of guys were catching me. It meant I couldn’t really relax.”

Georgia Tindley comments: “It was a good day out, but it was also really tough. It was very greasy on the rocks and it was cold and windy. It was much harder than last time.” 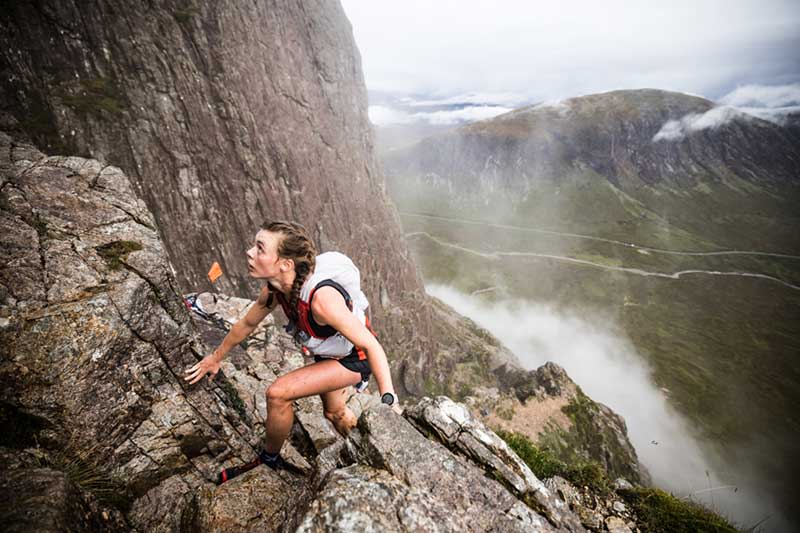 The final skyrace of the weekend was another 52k event (with almost 4,000m of climbing), the Salomon Ben Nevis Ultra™. Featuring remote Scottish glens, technical single track, airy ridges, and high mountain passes, the very challenging course is designed for the boldest all-round ultra-runners. The race included a traverse of one of Scotland’s most famous ridges, the Càrn Mòr Dearg Arête, leading to the summit of Ben Nevis.

Alan Hilley comments: “I can’t believe it. I never imagined I would be on the podium. At the beginning of the race I was feeling good, but then about halfway it felt like I had someone else’s legs. The big climb up to the Ring of Steall was so punishing. Coming down to Kinlochleven, I glanced behind and saw another runner and knew I needed to get my skates on. All the volunteers were amazing, too.”

Anwen Darlington, who lives in Dundee, comments: “Helen was ahead of me at the start and I let her go because I wanted to settle into the race. We then ran together for a while. But then I started to feel really good, especially over the rocky sections and I got my head down and just kept going. I have never been on the Càrn Mòr Dearg arête to Ben Nevis . I was worried about because it was so wet. But once you are up there it is so incredible. I was blown away by the whole course. I have never won anything like this before and it is fantastic. The support has also been fantastic.” 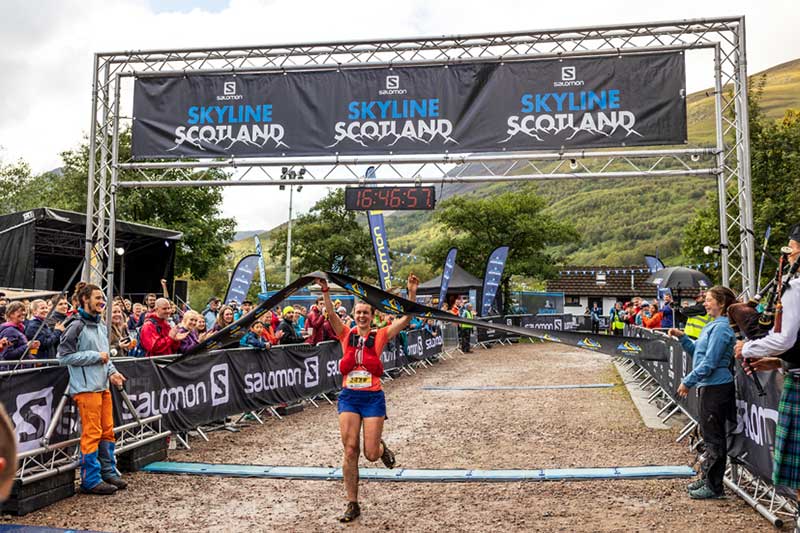 For more news from Salomon Skyline Scotland® 2021 and to find the full results from the races, visit www.skylinescotland.com and follow @skylinescotland on social media for future updates.

More in this category: « Salomon Skyline Scotland returns this weekend
back to top