“Sometimes I ask myself, what am I doing here?, It would be so much easier being at home having breakfast with my family.” The words of Severine Pont-Combe are similar to my thoughts almost every time I pit myself against the mountain.

But unlike me, Severine is the four-time winner of the iconic ski mountaineering race, the “Patrouille des Glaciers” and - not yet a week ago - she won the women’s team race of the 34th Peirre Menta, in the Arêches-Beaufort in southeastern France with teammate, Laetitia Roux of France.

The Peirre Menta ‘skimo’ race is considered one of the toughest in the world taking place over 4 days with a total elevation gain of more than 10'000 meters. And coming in at 14:04 hours, and 37th overall, the women are gradually closing in on the winning men’s times - of 11:28. hours.

“I always say this will be my last race,’ says Severine, again echoing my own frequent thoughts…. “but it was my ninth!” 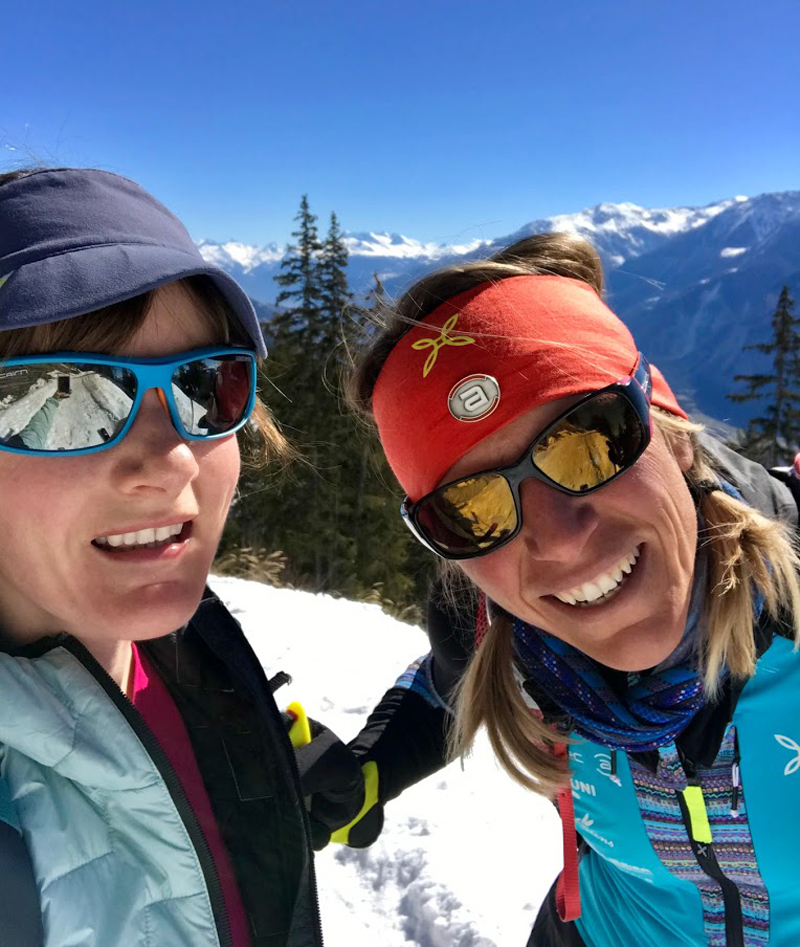 Maybe it was fate that I met the Swiss skimo star now,  as in a few days I’ll be attempting the “Patrouille Aiguille Rouge” which starts in Arolla and ends in Evolene in Switzerland, so I’m keen for any advice and motivation she can give me. Severine is showing me around the Rando Park in Crans Montana, in the Swiss Valais region where she lives. She tells me how she and her husband, former coach of the Swiss ski-mountaineering team and Swiss Olympic performance sports coach, Nicolas Combe, created the Rando Park out of a passion for the sport; so people could safely get into ski touring before venturing into the wild, or for those more serious about the sport to use for training. 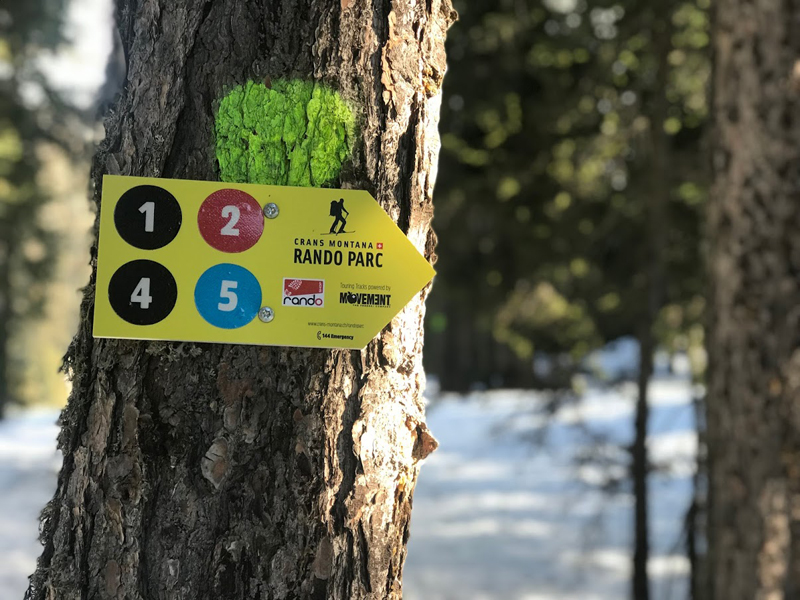 As we skin up together along trail number 13, she is congratulated and greeted with handshakes for her win- clearly a well known and popular face around these parts.

We stop for a coffee half way up and Severine waves at team mate Laetitia who is bounding up the hill with some friends. So this is how the ‘pro’s rest up after a race, I think. However, it’s difficult to actually be a ‘pro’ at skimo, as according to Severine, ’this is not tennis,’ referring to the prize money which isn’t really enough to live off and in some places like France and Italy, is often still much less for women, than men, despite being the same course.  “I’m also sport’s teacher, but I work 25 per cent so I can train and be a mother.  My husband works from home 75 per cent, so when the kids were small it was easier, he was with the girls so I could train. We just had to have good communication. The girls, Mila, who is 5 and Lili who is 9, were never at nursery and we don’t have a nanny or grandparents here. Also, my husband always trusts and supports me; so despite having my doubts or during my pregnancy when I stopped training for the whole year and gained 17 kg - I won the Patrouille des Glaciers ten months after Mila was born. 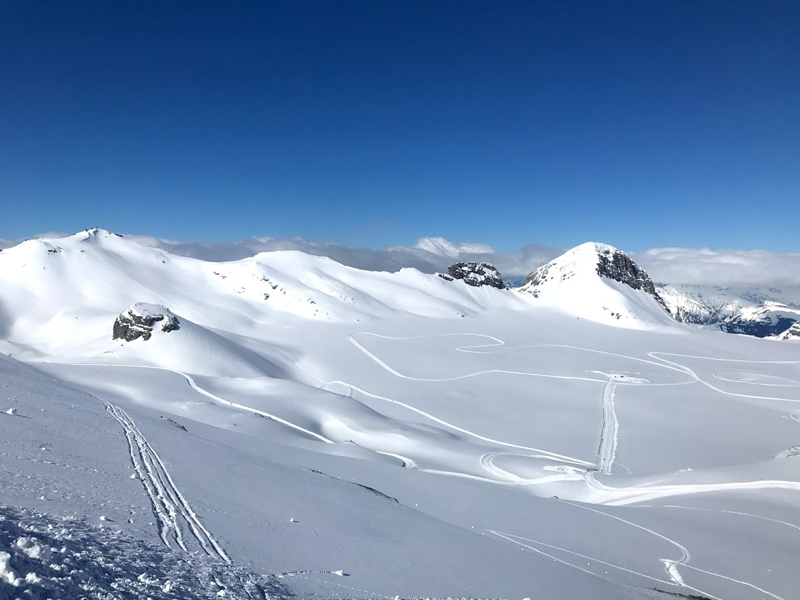 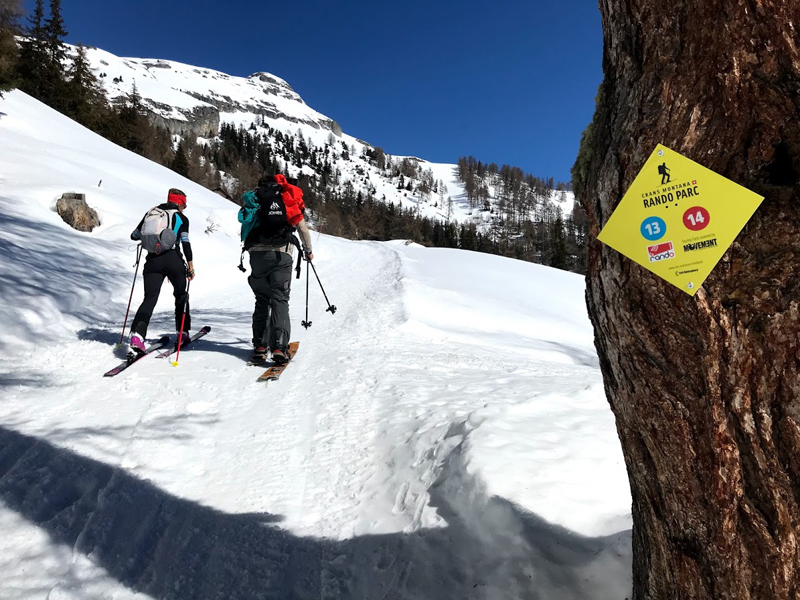 You might think that Severine had been born with skis on, but that’s not the case, as far as ski touring goes.  Born in Meyrin, a suburb of Geneva better known as the home of CERN, the  European Organization for Nuclear Research, she explains,  “I was 20 when I first put skins on, for my sports studies as a teacher and I started skiing with my husband aged  23. I’m 39 now- so its never too late.”

Ski touring, being in the mountains and setting up the Rando Park “is really a ‘family project too,” she says. “I’m a mother and my husband has been my trainer for 17 years and we are really involve our family.  We ski together and the girls were not at school last week so they could share the experience of the Pierre Menta. It’s a passion and we hope our girls are passionate about it too- even if they don’t want to do this later.  It’s about loving the mountains and nature and being comfortable with it. My little one is just 5 and she wants to ski tour now - but her dream is to go to the Matterhorn. I told her its possible, just to wait a bit.” 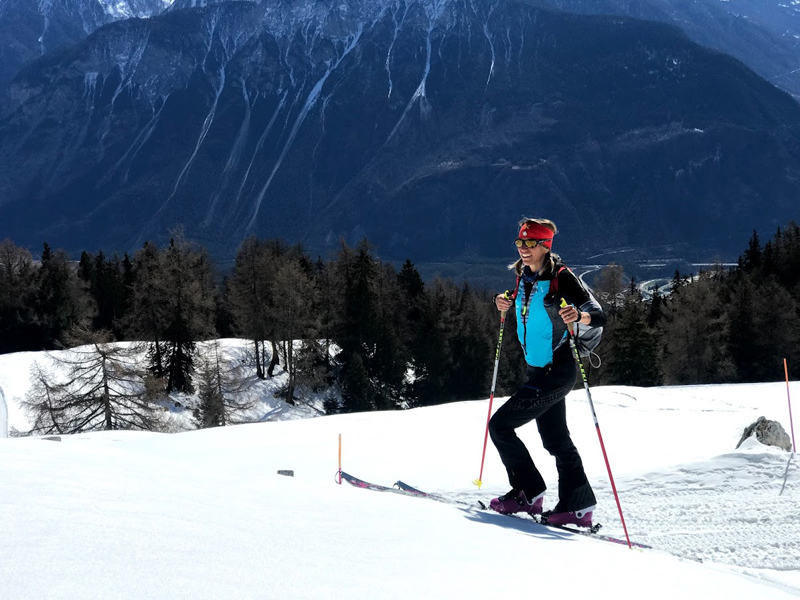 The Crans Montana Rando park is one of the first of its kind at this size, with over 40km of marked and secure paths consisting of 15 trails (blue, red and black in difficulty) ranging from 1.3km and 253m ascent to La X’treme at 34 km and over 3000m ascent!  But there are others smaller ski touring trails nearby, such as such as in Morgins, Les Marecottes and St-Luc: “people had the idea for a long time,” says Severine, “but it wasn’t easy to develop. But the sport has become more popular and its necessarily for ski resorts, especially the smaller ones, to survive as they can now even attract people who can’t ski.” The Rando Park costs just 5 CHF a day or 50CHF for the season, which allows you to take the lift down - and of course you have the reassurance the the site has been made safe, so you don’t even need avalanche equipment to use it. Just check with the Crans Montana app before setting out, to check what is open. 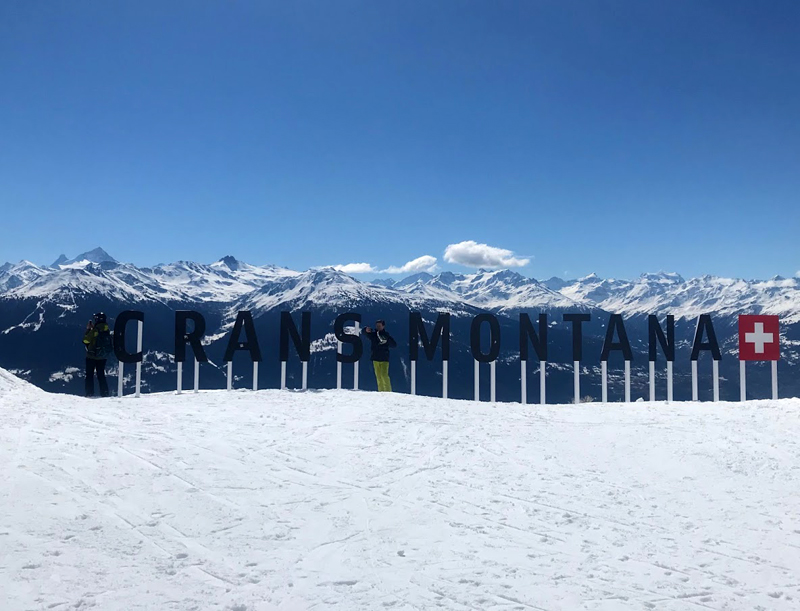 So how did they go about setting up the park? “We knew some of the different routes and we had to create new ones . So we begin in the summer, clearing the paths etc, then in November we put up all the markers - there are about 600 of them!” And if you’re new to the sport? “Just go easy at first, don’t say you will climb 1000m - just enjoy it and go progressively, preferably with someone who knows what they are doing. And use the good light material which we have now, as it’s already difficult enough!” Once you gain more experience you can start looking outside the park: “I know where to go if I want to be alone, or do something more ‘ alpine.’ If you want to do this, take a guide and discover new places,’ says Severine. 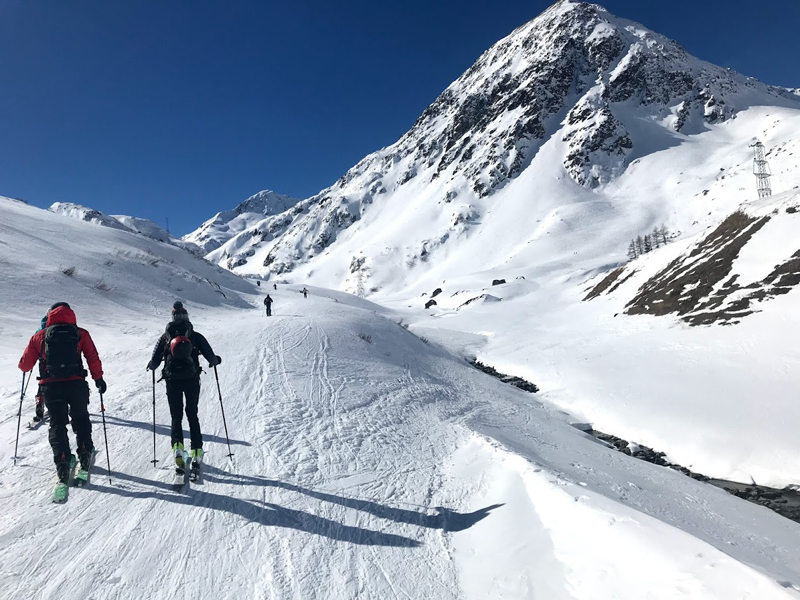 A ski tour to the Grand-St-Bernard Hospice at just under 2500m altitude is a great way to make your first venture outside the security of the park. Located at the St Bernard pass, on the border between Italy and Switzerland the thoroughfare has been used for thousands of years by pilgrims heading to Rome on the Via Francigena. Founded in the 10th century as a refuge for weary travellers and only accessible by snow shoes or skis in winter, its a mellow tour taking at most three hours, unless you want, like myself,  to take a detour to places such as the Col De Barasson, right on edge of the Swiss border. You can also stay overnight at the monastery, where you are greeted by the monks, and served dinner and breakfast. You can even stay for mass there or take a moonlight walk, before further tours or skiing down in the morning. 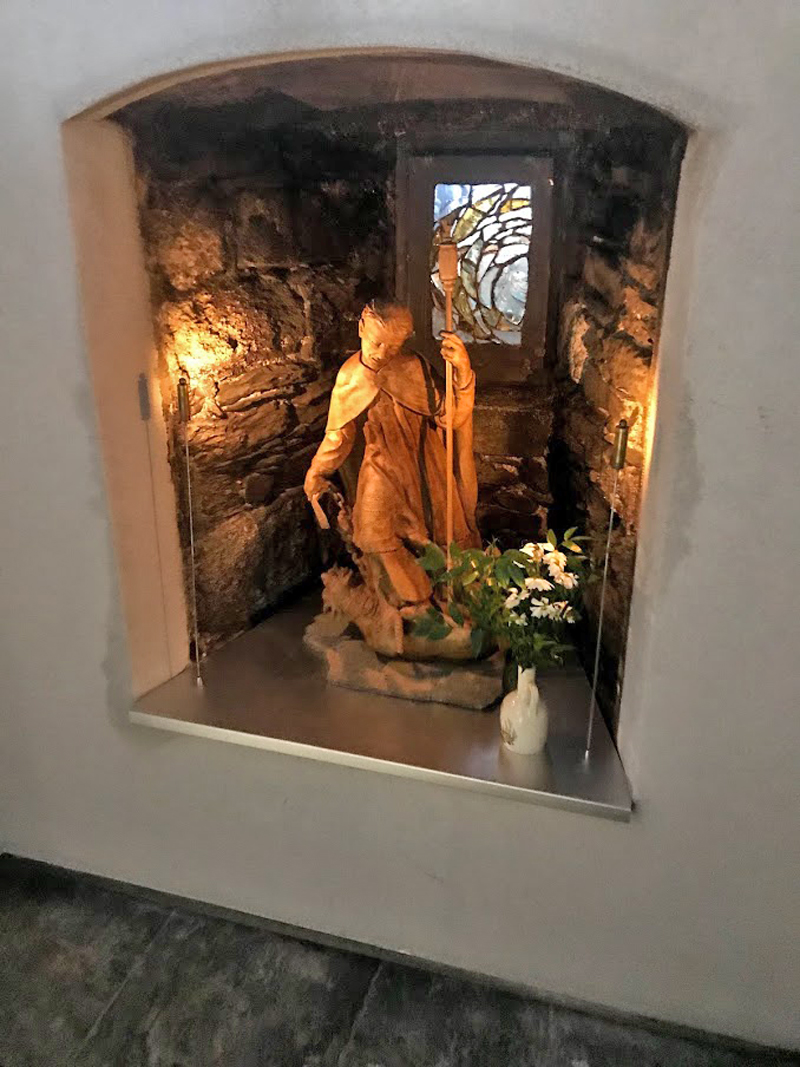 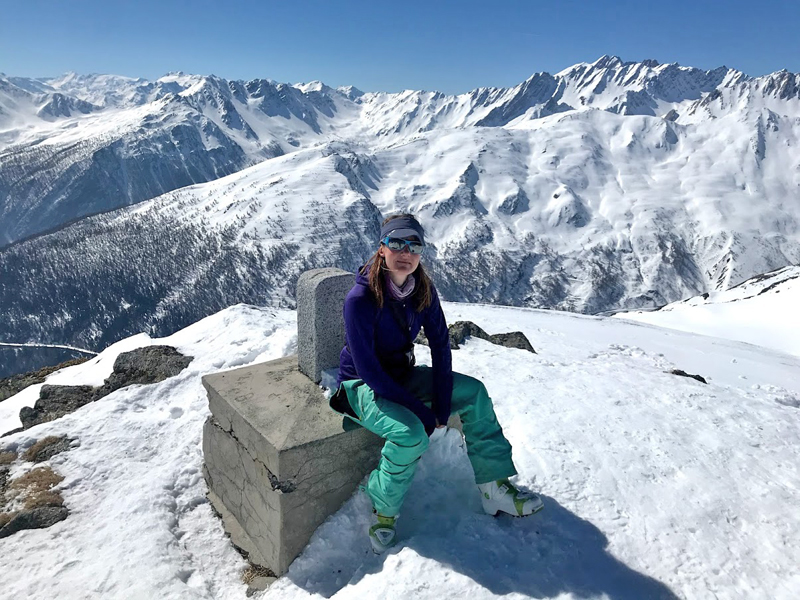 To carry on chatting to Severine, I have to keep up with her pace…. so - gasp gasp- "any tips for the Patrouille Aiguille Rouge”?” I ask. “ Don’t go too fast at the start and always always be with your teammate; never leave them alone, so you can help if there is a problem.” But what about the mental side? “When you’re tired look up at the sky and the mountains and take energy from them,  and not only from your skis - I’m sure it helps, it means that everything is ok. The most challenging part of the race,” she says, “is keeping going in your head when your body doesn’t want to follow any more and when your legs are hurting because you are descending and you want to stop. Your head must tell you ‘no, you’re strong you can do this.’  So maybe what is challenging for me is to always stay positive, even if I’m tired and can feel negative karma, and am thinking ‘this is too hard or the others are not far behind me or it’s so long.’  I need to be positive all the time, but we have to work for that every day.” 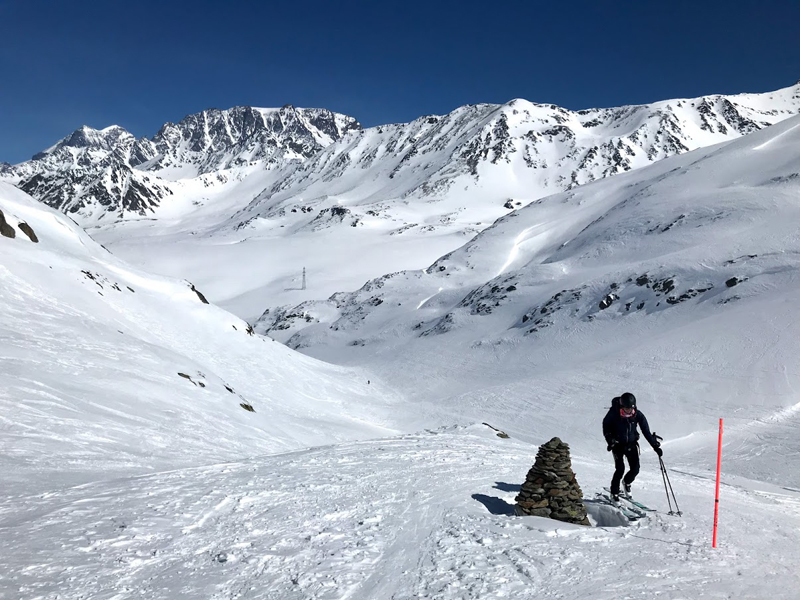 ‘But it's magnificent sport,” says Severine, “because its in nature and an alpine environment and because you do it in pairs so you share something with someone.”

Finally, as we reach the mountain restaurant at the top of route 13, Colombire, I ask her if turning 40 is going to hold her back at all: “Well,” she ponders, “for sure recuperation takes longer - but otherwise I feel good now at 39. At this age you are good for endurance sports - as are women who have had babies - maybe you’re also stronger in the mind. I see it in sports like decathlon and cross country skiing - perhaps it’s not the case for the majority but  - if you still have pleasure - you’re good. I just really need more rest!”

More in this category: « Freeride World Tour Austria - Day 2 The Alpen Express - Ski the Alps without the flights »
back to top